What Will Make Market Notice This Gold Company?

FenixOro’s Colombian gold project is just 15km from a world-class, high-grade gold mine that the team’s COO helped discover and develop before it was sold for CA$1.4 billion. FenixOro believes it has a similar mine in the making with possibly 6 to 10 million ounces of medium or high-grade gold, yet the market values the company at CA$14 million.

In prior articles, I’ve mentioned that the best analog mine to the Company’s 100%-owned Abriaqui project is Zijin Mining’s Buriticá mine ~ 15km away. Buriticá was acquired by a Chinese firm for CA$1.4 billion in late 2019, (when gold was ~$1,550/oz.), but at current prices, the after-tax NPV from its Bank Feasibility Study would be ~CA$2 billion.

Without overstating the favorable comparisons of Buriticá to Abriaqui, both deposits have greater than 140 closely spaced, narrow high-grade veins in corridors hundreds of meters wide, mixed with areas of lower-grade mineralization.

Both enjoy mineralization over substantial vertical extents (1,200+ meters) and are open at depth. Both are near the northern end of the 200km Middle Cauca geologic trend, where more than 80M ounces of gold have been discovered since 2007.

The following image shows Buriticá’s main resource compared to Abriaqui. Notice that 12 million-plus ounces are hosted on about one-third the size of FenixOro’s project. Buriticá’s overall land package is greater than 70,000ha, but the gold being mined is contained in a small fraction of the overall property.

This is what vertical extents of over 1,200 meters for both Buriticá and Abriaqui can deliver—millions of ounces on small footprints. 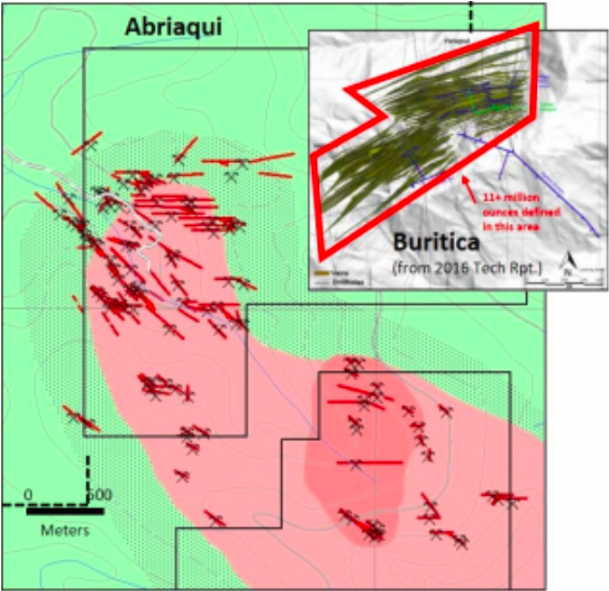 A huge differential like that might make sense in the depths of a bear market, but not in what looks to be a bull market in gold. Consider the option value alone of a project that (mgmt. thinks) could host 6 to 10 million ounces [assuming the Southern Block (SB) is as well mineralized as the Northern Block (NB)].

Last month management announced its highest grade ever, a mine channel sample of 425 g/t gold, and the discovery of a Central Zone (CZ), which is a lateral extension of the NB. In addition to the 425 g/t sample, five others grading over 50 g/t have been found so far. Three initial holes in the SB each intersected seven to 10 veins with several narrow intervals of greater than 10 g/t gold.

Although early days, the resource potential in the newly defined CZ is promising with the newly drilled interval of 1.25m @ 23.55 g/t.

The following is a quote from the May 9th press release, “In management’s view, these developments are significant and underscore that we’re still in the early stages of fully understanding the project’s ultimate potential. New zones and extensions of existing zones continue to be discovered.“

Partial results from initial drilling on the SB indicate that many more veins were intersected than indicated from surface and mine mapping. The area is 200-400 meters higher in elevation than the NB and CZ.

Management reports that mine samples in the SB suggest a significantly higher silver to gold ratio than in the NB (~15:1 vs. ~2:1), plus elevated copper values. The SB has yet to be meaningfully drilled, but like the NB, management believes it could host millions of ounces. 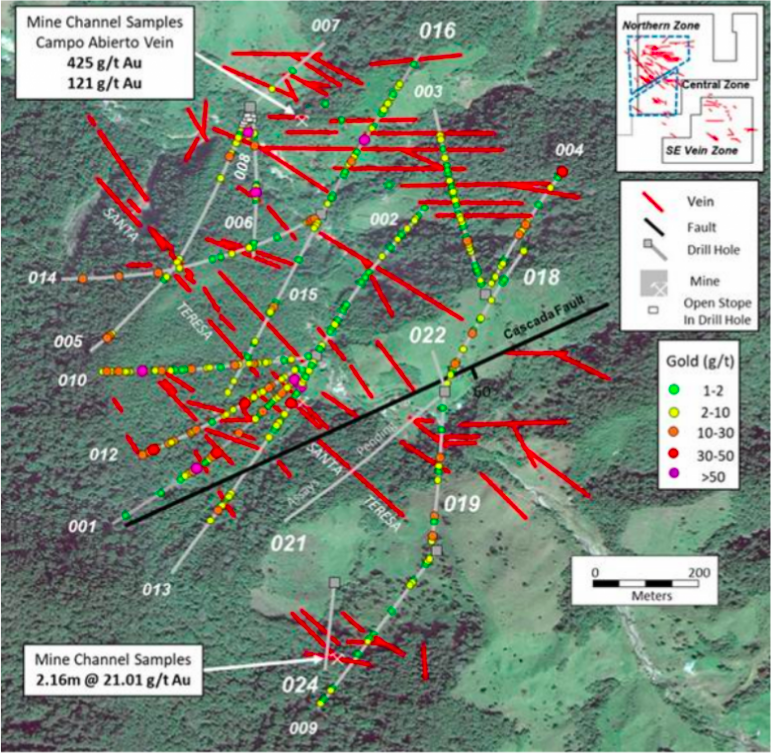 Since 2020, 11,663 meters have been drilled on the project. As reported on a May 17th investment call, management believes there’s enough smoke (but no fire) to infer 3-5 million ounces of gold on the NB alone. Having said that, the Company has yet to deliver a maiden mineral resource.

Investors do not share management’s confident, optimistic view. If they did, the valuation would be much higher. They appear to be holding out for more evidence of a medium-to-high grade, multi-million-ounce resource. They want to see wider intercepts COMBINED WITH high grades, perhaps a few 100+ [g/t gold x meters] intervals.

When Buriticá filed its maiden mineral resource estimate (MMRE) in September 2011 it contained 3.13 million Indicated + Inferred ounces of gold at a weighted average grade of 12.3 g/t (based on 54,200 meters of drilling). So far Fenixoro has drilled ~21% of the number of meters that produced Buriticá’s MMRE.

However, Fenixoro is drilling with the knowledge of Buritica’s geology and structure—Buriticá had no analog mine to emulate. That’s a big difference. I believe that management should be able to deliver an MMRE of one million-plus ounces next year.

Some investors may not impressed with 1M oz. when management is pointing to the possibility of 6 to 10 million, which is why the Company’s valuation languishes.

On the investor call, CEO John Carlesso mentioned that Majors were watching Fenixoro’s progress. That suggests there are at least two ways to win here. First, a few blockbuster intervals, and second a strategic investment from a mid-tier or a Major. Either or both of those events could happen this year.

Bonanza intervals from the NB, SB, or CZ would force investors to reconsider the potential scale of the overall Abriaqui project and to take comparisons to Buriticá a lot more seriously. A strategic investment at the project level would alleviate the fear of continuous capital raises and would be a strong vote of confidence in Fenixoro’s team/project.

Fenixoro is not the only gold junior that has been crushed in recent months. Even after substantial sell-offs, nine high-grade juniors in the chart below are trading at an average EV/resource of CA$44/oz. On average, those peers are down 53% from their 52-week highs versus -59% for Fenixoro.

There are surprisingly few high-grade juniors with current NI 43-101 compliant resources. I estimate that less than 5% of exploration-stage companies have resource grades of 5+ g/t gold. The nine names I chose are representative of the universe of pre-PEA names.

Since Fenxioro is pre-MMRE, it deserves to trade at a discount to the CA$44/oz. average (for its exploration target). Based on drilling on just FenixOro’s NB, and its proximity and similarities to Buriticá, there’s no doubt that millions of ounces are possible.

It’s a matter of how well connected the 140+ narrow, high-grade vein systems are—the project’s continuity—and the (lower) grade of surrounding mineralization. If the interceding material averages 1.5-2.0+ g/t, that’s great, but under 1.0 g/t would make the project less exciting. 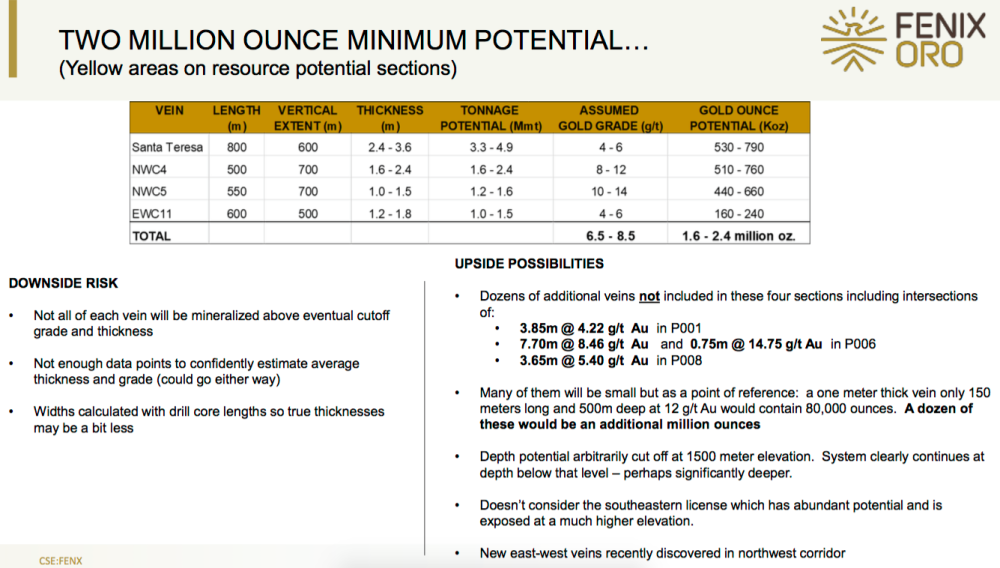 If the company could delineate a two-million-ounce resource and trade at CA$22/oz. [half the peer average], the stock would be a triple (not incl. equity dilution between now and delivery of a 2m ounce resource).

As I’ve stated in other articles—if management can delineate even 1m ounces in a manner that validates the calculations of its exploration target, then investors would have line-of-site to a much larger resource.

The SB has been described as having the same mineralized potential as the NB. How many projects around the world have the potential to be both 6m+ ounces and more than 5 g/t Au? Please take a moment to review the peers. a resource of 6 – 10 million ounces would be huge.

How much would a producer pay for a decent shot of greater than 6M+ oz at more than 5 g/t? A player with a valuation well into the billions of dollars could easily afford a multiple of FenixOro’s current CA$14 million EV to expand its presence in-country or to establish a fresh start in Colombia.

Not only would an acquirer obtain a very promising (exploration-stage) asset, it would avoid years of valuable time spent finding and acquiring property, doing initial studies, winning local community support, permitting, and drilling (and waiting for results) to reach the stage that FenixOro is at today.

The share price performance of FenixOro Gold Corp. has been a disappointment, but it’s not alone in its significant sell-off in recent months. However, the cheap valuation (albeit with considerable risks), offers investors the opportunity to step in ahead of hoped-for big news [a strategic investor and/or blockbuster drill results].

The content of the above article is for information only. Readers fully understand and agree that nothing contained herein, written by Peter Epstein of Epstein Research [ER], (together, [ER]) about Fenixoro Gold Corp., including but not limited to, commentary, opinions, views, assumptions, reported facts, calculations, etc., is to be considered implicit or explicit investment advice. Nothing contained herein is a recommendation or solicitation to buy or sell any security. [ER] is not responsible under any circumstances for investment actions taken by the reader. [ER] has never been, and is not currently, a registered or licensed financial advisor or broker/dealer, investment advisor, stockbroker, professional trader, money manager, compliance or legal officer, and does not perform market-making activities. [ER] is not directly employed by any company, group, organization, party, or person. The shares of Fenixoro Gold Corp. are highly speculative, and not suitable for all investors. Readers understand and agree that investments in small-cap stocks can result in a 100% loss of invested funds. It is assumed and agreed upon by readers that they will consult with their own licensed or registered financial advisors before making investment decisions.

Readers understand and agree that they must conduct their own due diligence above and beyond reading this article. While the author believes he’s diligent in screening out companies that, for any reason whatsoever, are unattractive investment opportunities, he cannot guarantee that his efforts will (or have been) successful. [ER] is not responsible for any perceived, or actual, errors including, but not limited to, commentary, opinions, views, assumptions, reported facts, and financial calculations, or for the completeness of this article or future content. [ER] is not expected or required to subsequently follow or cover events and news, or write about any particular company or topic. [ER] is not an expert in any company, industry sector, or investment topic.

2) The following companies mentioned in this article are billboard sponsors of Streetwise Reports: None. Click here for important disclosures about sponsor fees.

5) From time to time, Streetwise Reports LLC and its directors, officers, employees, or members of their families, as well as persons interviewed for articles and interviews on the site, may have a long or short position in the securities mentioned. Directors, officers, employees, or members of their immediate families are prohibited from making purchases and/or sales of those securities in the open market or otherwise from the time of the decision to publish an article until three business days after the publication of the article. The foregoing prohibition does not apply to articles that in substance only restate previously published company releases.

What Will Make Market Notice This Gold Company? News

What Will Make Market Notice This Gold Company? Resources