The Consequences of Budget Deficits for International Trade

Long before the covid-19 lockdowns, economic and financial developments threatened to undermine both the US economy and the dollar.

The similarities between the situation today and the end of the roaring twenties, and the depression that followed, are enormously concerning. Both periods have seen a stock market bubble, fuelled by bank credit and an artificial monetary stimulus by the Fed. Both periods have experienced an increase in trade protectionism: In October 1929, the month of the crash, after debating it for months Congress finally passed the Smoot Hawley Tariff Act, raising tariffs on all imported goods by an average of about 20%. In 2019, US trade protectionism against China put a stop to the expansion of international trade. These facts, which should continue to concern us, have been buried by the immediacy of the coronavirus crisis, which is an additional burden for the global economy today compared with the situation ninety years ago.

As is nearly always the case in the year of a presidential election, economic negatives get buried in waves of reflationary optimism. This time the optimism has in turn been buried by the virus, but the reflation relation is still there in spades. The American budget has soared from a previously planned trillion dollars or so to $3.3 trillion in the fiscal year that ended last month. Between March and September, the deficit increased over the first half of the fiscal year by $2.7 trillion, an annualised rate of $5.4 trillion. And given the resurgence of the virus and the US Government’s commitment to avoid the slump, not only is the budget deficit likely to be even greater in the current fiscal year, but all else being equal it will be out of control for several years to come. Money-printing as a source of finance has already overtaken tax receipts by a substantial margin.

While the Wall Street Crash commenced in late September 1929, there was an initial consolidation that lasted until the following May, nearly eight months. The recent market collapse between last February and March and the initial recovery to September echoed the duration of the recovery in 1929—1930, as shown in Figure 1 below. Today’s Dow is superimposed on the that of 1920—1933. 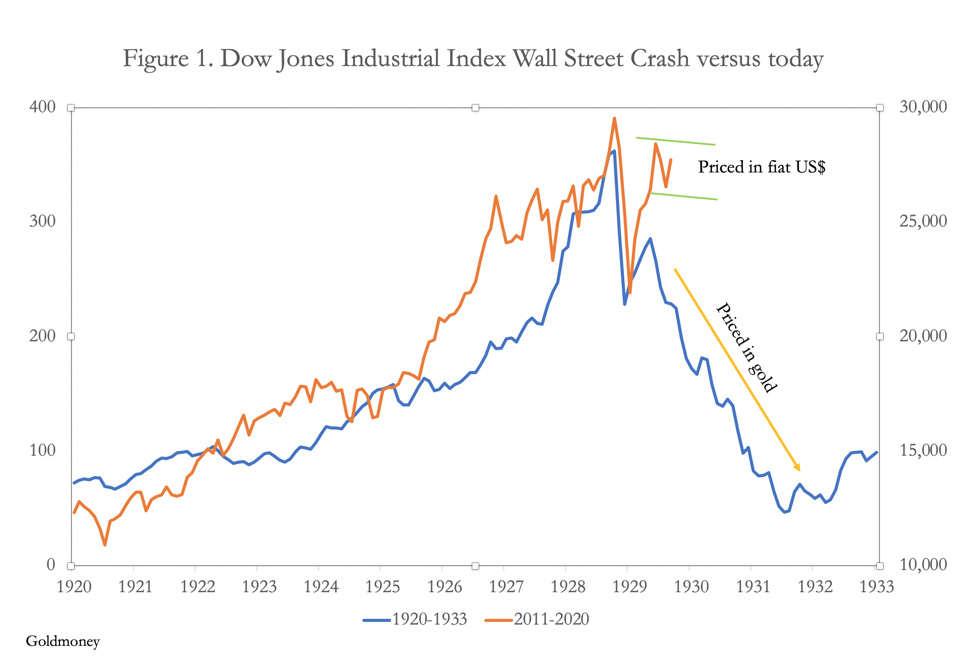 The difference between the two periods is that between 1920—1933 the Dow was effectively priced in gold through the dollar at $20.67 to the ounce, while today it is priced in unbacked fiat dollars. It is a matter of fact that today’s dollars are issued by the Fed with a view to keeping the investment yardstick, US Treasuries, yielding as little as possible. And by flooding the financial markets with money, in relative valuation terms equity prices are artificially supported in defiance of economic fundamentals by current monetary policies.

It is a situation that cannot persist. Sooner or later, monetary inflation will undermine the purchasing power of the dollar as measured on the foreign exchanges, foreign selling of dollar portfolio assets is bound to escalate, the yields on US Treasuries will rise beyond the Fed’s control, and equities will adjust towards fundamentally derived values.

The Consequences of Budget Deficits for International Trade News

The Consequences of Budget Deficits for International Trade Resources