With geopolitical tensions rising, the US recently banned defense contractors from purchasing REE metals from China and will consequently attempt to revive its domestic rare earths industry. However, the US has just one rare earth mine and no processing technology, which highlights the need for a new wave of investment, writes McAlinden Research Partners.

Rare earth elements (REE), which consist of a group of seventeen metals, are some of the most important minerals on earth that are used to manufacture several products key to the future of the modern world.

Rare earths are used in the production of smartphones and semiconductors, both of which are expected see increased demand throughout the coming years as the world shifts online and becomes more and more reliant on technology.

MRP has recently highlighted the importance of semiconductors amid the ongoing shortage and a permanent shift in behavior due to a global digital transformation. As that transformation accelerates, the role of rare earths will also rise.

These metals are also an integral part of the renewable energy transition sweeping across the globe.  According to a report from the International Energy Agency (IEA), the amount of minerals necessary for a new unit of power generation have increased by 50% since 2010 and that number is likely to rise as the United States continues to embrace clean energy.

Wind energy is especially dependent on rare earth metals. According to Lynas Rare Earths, the wind turbine market is expected to account for approximately 30% of the global growth in the use of rare earth magnets by 2025.

Last week, MRP highlighted the growing demand for battery metals due to the rising number of electric vehicles hitting the road. Demand for rare earths is also expected to increase due to those lofty EV goals currently set by the Biden administration. Per a September report from Forbes, the United States needs more than ten times its current rare earth supplies to reach Biden’s goal of having 50% of cars sold in 2030 be zero-emission electric vehicles.

To meet the burgeoning needs of the rapidly expanding green economy, the US will need more than 20 to 25 times its current supply as investment into electric vehicles, wind power and other renewable technologies climb through the decade.

These minerals are also imperative in the production of many defense applications. In the industry, two rare earth metals, neodymium and samarium, are used to create magnets that are resilient to high temperatures which is important for mission-critical electronic and defense applications.

Other rare earths are used to manufacture fighter jets and soldier semiconductors, a sector that Army Technology notes is projected to be valued at $17.5 billion by 2030. With global tensions rising around the world amid the Russian invasion of Ukraine, building up domestic supplies of these metals is key to avoiding reliance on Chinese imports.

Bank of America predicts that demand for rare earths is set to increase by 500-600% in the coming decades, while US policymakers have acknowledged that relying on China and other international suppliers is no longer a feasible strategy.

While the importance of rare earth metals cannot be understated, the level of investment put into domestic production in the United States is certainly a cause for concern.

Roughly 38% of the world’s rare earth reserves are found in China, and the country was responsible for 90% of all global exports in 2019. China accounted for roughly 80% of the Unites States imports of those metals two years ago, a worrying sign that the US is entirely too dependent on foreign nations for their rare earth supplies.

Army Technology points out if China were to close the tap of their rare earth reserves or reduce their exports amid a trade war with the US, US rare earth supplies would be significantly limited at a time when demand is soaring. China has previously temporality blocked rare earth exports to Japan in 2010 and has also formerly made vague threats that it could do the same to the United States. 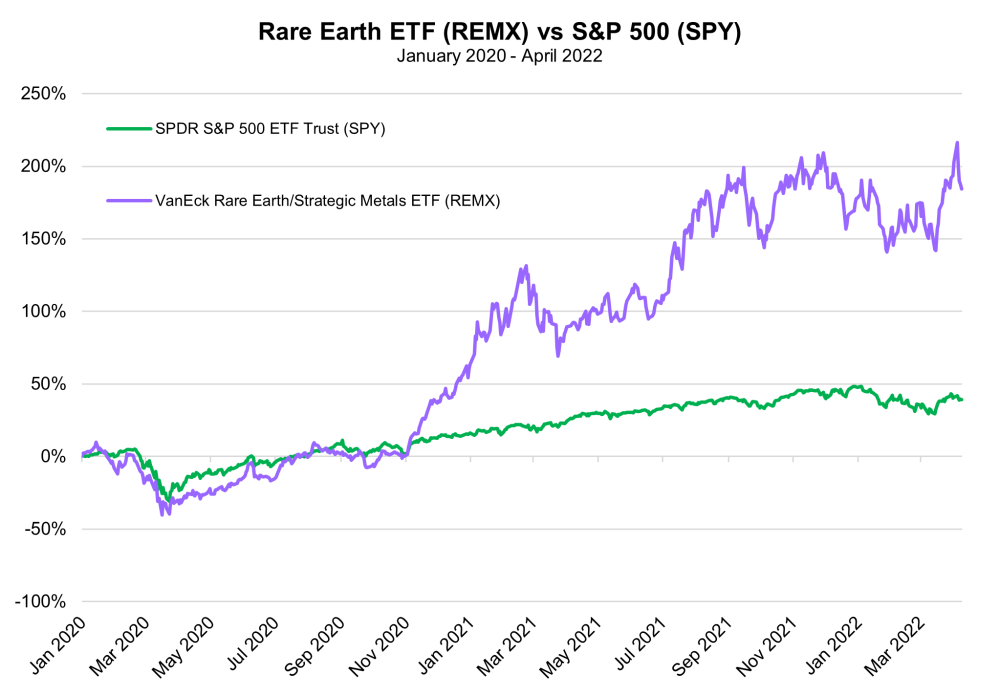 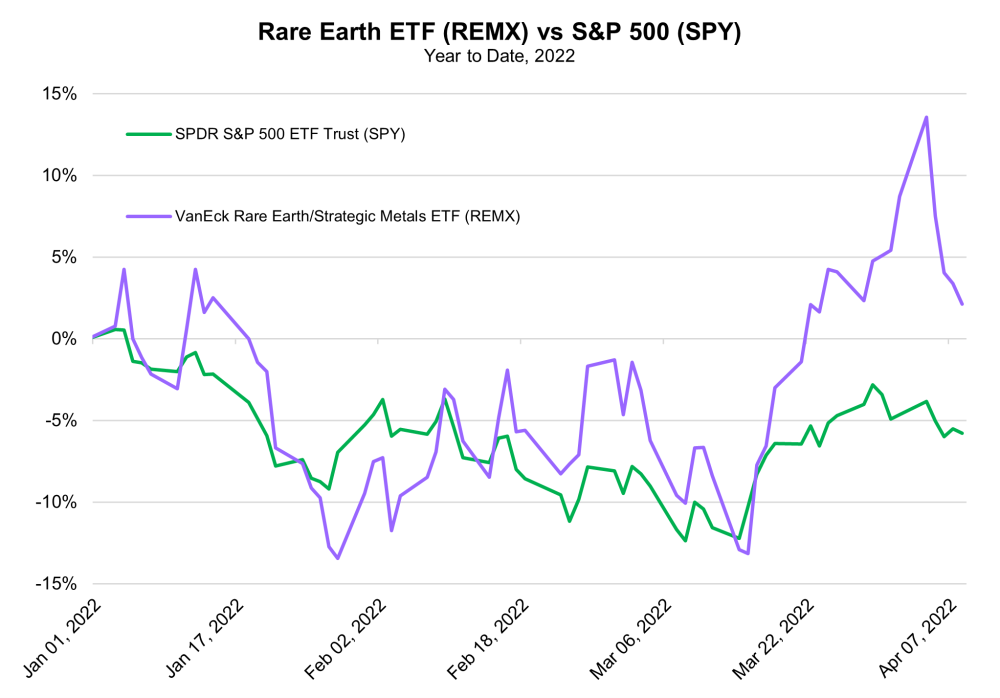 Pini Althaus, founder of USA Rare Earth, told Global Defence Technology that the US is in an extremely precarious position and the only way to have a secure rare earth supply chain is to start developing projects domestically.

The US has made efforts to boost domestic production of these metals, but they remain woefully lacking. Reuters reported in January that the US only has one rare earths mine in the US and currently has no capability to process rare earth minerals.

To try and ease the dependence on China, the Restoring Essential Energy and Security Holdings Onshore for Rare Earths Act of 2022 was introduced that would essentially force defense contractors to stop buying rare earths from China by 2026. The bill is expected to be looped into Pentagon funding legislation later this year.

A month after that bill was introduced, the Pentagon announced it is developing plans to boost the current stockpiles of both rare earths and battery metals, a move that would require much more domestic mining production, per Reuters.

Real Clean Energy believes mining is only the first step. The US must put that same amount of investment into the refining and processing parts of the domestic rare earths supply chain, which while currently a small sector, has significant growth potential in the coming decades.

To conclude, rare earths remain a critical group of minerals for the global defense industry, renewable energy development and the rapidly accelerating digitization of the modern economy. The US is at risk of falling behind in the race to secure rare earth supplies if it does not soon boost domestic mining and processing of these metals and shift away from the overwhelming reliance on China.

McAlinden Research Partners (MRP) provides independent investment strategy research to investors worldwide. The firm’s mission is to identify alpha-generating investment themes early in their unfolding and bring them to its clients’ attention. MRP’s research process reflects founder Joe McAlinden’s 50 years of experience on Wall Street. The methodologies he developed as chief investment officer of Morgan Stanley Investment Management, where he oversaw more than $400 billion in assets, provide the foundation for the strategy research MRP now brings to hedge funds, pension funds, sovereign wealth funds and other asset managers around the globe.

1) McAlinden Research Partners disclosures are below.

2) The following companies mentioned in this article are billboard sponsors of Streetwise Reports: None. Click here for important disclosures about sponsor fees. The information provided above is for informational purposes only and is not a recommendation to buy or sell any security.

5) From time to time, Streetwise Reports LLC and its directors, officers, employees or members of their families, as well as persons interviewed for articles and interviews on the site, may have a long or short position in securities mentioned. Directors, officers, employees or members of their immediate families are prohibited from making purchases and/or sales of those securities in the open market or otherwise from the time of the decision to publish an article until three business days after the publication of the article. The foregoing prohibition does not apply to articles that in substance only restate previously published company releases.

McAlinden Research Partners:
This report has been prepared solely for informational purposes and is not an offer to buy/sell/endorse or a solicitation of an offer to buy/sell/endorse Interests or any other security or instrument or to participate in any trading or investment strategy. No representation or warranty (express or implied) is made or can be given with respect to the sequence, accuracy, completeness, or timeliness of the information in this Report. Unless otherwise noted, all information is sourced from public data.
McAlinden Research Partners is a division of Catalpa Capital Advisors, LLC (CCA), a Registered Investment Advisor. References to specific securities, asset classes and financial markets discussed herein are for illustrative purposes only and should not be interpreted as recommendations to purchase or sell such securities. CCA, MRP, employees and direct affiliates of the firm may or may not own any of the securities mentioned in the report at the time of publication.