Why Most Investors Will Miss Out on the Coming Upside Silver Breakout – Part 1 | https://www.themorganreport.com

As silver makes an upside breakout on good volume above $30 – initially confirmed by several closes above that price (an occurrence I believe will take place this year) – the number of investors (as opposed to speculators) will immediately begin to shrink.

This will continue to take place as the price works its way up toward $50 and accelerate into new all-time highs over the next 12-18 months, toward the magnetic target of $100 an ounce… For a start?

The likelihood of and reasons for this being the case are the primary foci of this essay.

“Taking a tidy profit” after holding/adding to a position for such a long time. There’s nothing wrong with taking some money off the table, especially into $45-$55 silver, but if you believe (as I do) that a literal once in a lifetime opportunity in gold, the miners and especially silver awaits us, then be careful about taking too much out, lest you end up riding the wave with a position size that’s much smaller than you were willing to risk at lower levels.

Much as you should buy in tranches (portions), so should you discipline yourself to – as Stewart Thomson likes to say – “Sell less than is rational.”

“Recency Bias”. “Silver has failed before, either in the high twenties, or around $50, and this time will be no different. ‘Da boyz’ will always remain ‘Masters of the Universe’ in this arena. The price will never break out unless they decide to let it.” (Except for the old saw: “They are right every time, until they aren’t.”)

And don’t forget about “cycles” and “free rides.”

A run-away market is rare, but when they do take place, or if it’s simply a powerful impulse leg, most technical micro-analyses including “overbought/oversold” water-witching assumptions, can better be used as tactics, not strategy.

Like many of you, I experienced this up close, personal and with blinding speed, during the 6-month silver and miners’ explosion out of the late 2015 pit into June 2016. All the way up, soothsayers were counseling to “take profits into overhead resistance levels” which in the event only slowed the upward rush for a day or two… if that, before making new intermediate highs. This went on for almost 6 months!

My back -of-the napkin guess is that less than 20% of those with positions in that market took even close to 50% of the available profits. As for the rest? Not (nearly) as much.

Adding insult to injury, the resulting top was not a spike, but a roll-over, enabling reasonably competent investors to offset 30-50% of their profits into a willing crowd of new buyers.

Disbelief in the fact that “this time it is different.” Folks, I don’t care if you’ve held and added more gold and silver for years, and that all of us have been wrong about “the big breakout.” By any rational measure, by even the most rudimentary fundamental analysis, the time when silver – among all other metals will continue trading at such a wildly distorted price-versus-value metrics grows short.

The market is not going to drop a starting flag for you. What if we’re not just “three feet from gold” but three inches? When, not if, this event takes place it will be a one-time deal. No second chance for you.

Silver’s (“off-putting”) tendency to lag Gold. Historically this has been the way to bet, but sometimes silver gets a bit in its mouth and decides to “do its thing.” Not to mention that in 1979-80, both gold and silver took turns with the price baton on their own, while the other remained quiescent for a few days or even weeks.

Plus, the way it likes to “break support” and be rebuffed by resistance line chart patterns before doing just the opposite.

Experience shows that when an impulse leg gets going, often for weeks – even months – the predictive ability of most chart data points recedes in value. If, in addition, “animal spirits” put in their appearance, then all bets are off. One is just best to follow the time-tested motto, “Be right. And Sit tight.”

Counterparty risk: Most reading this understand that having your gold and silver in an “unallocated” account means that one more layer of accountability lies between you and your gold. But what if it is supposedly “allocated” – held in your name?

What if your “allocated” silver isn’t in bailment as part of a true depository storage arrangement or doesn’t actually exist (even though you’re being charged insurance and storage)? And then what happens if the counterparty goes bankrupt?

And don’t think this risk only applies to “the little guys.” I would suggest (as David Morgan has discussed publicly since late last year) that it’s probable some large metals’ customers who assume their silver is actually being held in storage in their name, could turn out to be “bag holders.” 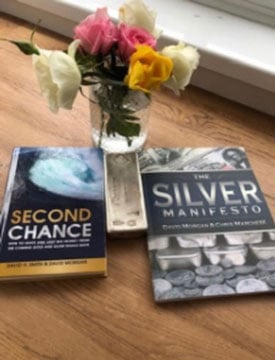 A few years ago, a major banking house lost a case exactly because of how they had defrauded their customers in this way.

As a variation on the theme, there’s already precedent for bank “buy ins” – where a bank in trouble takes a big chunk of customer funds to solve their own financial missteps.

We may now “have an edge”

As, Stanley Druckenmiller, one of the world’s greatest investors opines, “When you know you have an edge, push the advantage.”

If you believe, as I do, that we may be on the cusp of developing such a fine and very sharp edge, might it not also be time to “push that advantage”?

Let My Passion Create Your Wealth.

I’ve Been Helping My Subscribers Weather the Current Economic Mess. Now I Invite You to Join My Growing Circle of Successful Investors.

The Morgan Report is all about YOU and how you can build and preserve Wealth for generations to come. We know it can sometimes seem a daunting task to protect your assets and preserve or grow your wealth. Over 15 years ago, a small group of us started The Morgan Report and formed an exclusive membership organization to promote personal freedom, an honest money system, free market wealth accumulation, and asset protection.

Through our publication, The Morgan Report, we provide you with ways to achieve greater financial security and wealth in all sorts of environments.

Learn more and become an insider for The Morgan Report, click link below…

Because there is a 100% failure rate of ALL fiat money throughout history, you will learn what to do by obtaining your Free Report. Just enter your first name, your primary email address and click the Get Special Report button below.

“To teach and empower people to understand the benefits of an honest monetary system.”

Today’s monetary system is based upon a lie. The lie is that you can get something for nothing, or perhaps more simply stated, wealth can be printed. History has shown throughout 5000 years that whenever a country has tried to maintain this illusion (lie), failure has been the result. We invite you to learn more about what The Morgan Report can do for you. Click on the Learn More About The Morgan Report button now!

Learn More About The Morgan Report *