Every once in awhile I start thinking that maybe the world isn’t quite as insane as it was yesterday. So maybe we don’t need to invest in the metals as protection against financial insanity. Then I wake up.

The United States and its lapdogs in crime spent twenty years fighting in Afghanistan trying to defeat a mob of goat herders armed with AK-47 rifles. It cost $2.3 trillion and we got run out of the country with our tail between out legs. Not a single US General ever said anything about the stupidity of picking a fight in the Graveyard of Empires. So now the Neo-cons want to threaten both China and Russia for another conflict. At the same time.

Sesame Street recognizes the importance of teaching young children the joys of taking an experimental gene therapy jab so Big Bird is teaching them about myocarditis and the Cookie Monster is covering Bells Palsy. Elmo does the heart attacks. Tell me that is not sick.

The IDF in Israel mobilized thousands of reserves over the weekend after being told by the government to “prepare for war with Iran.” Nuclear-armed Israel has a population of about 8.7 million while non-nuclear armed Iran counts 84.7 million population. Gee, I wonder how Israel is going to win that war.

Thesis Gold Inc. (TAU:V) picked up 100% of the Ranch Gold property located in the Golden Horseshoe region of Northern British Colombia in October of 2020 by paying $250,000 in cash and issuing 14 million shares to the vendor. The vendor retains a 2% NSR.

On December 7, Thesis released results from an additional four holes of a one hundred and six-hole program that tested 16,139 meters of drilling. Those results were just as good at the initial results released by Great Bear Resources in August of 2018 when GBR was at about $.50 a share on the way to an offer of $29 a share last week from Kinross. What investors don’t understand is that Thesis actually released results two months ago that not only were a lot better than Great Bear, they were near surface and the GBR results were a lot deeper. 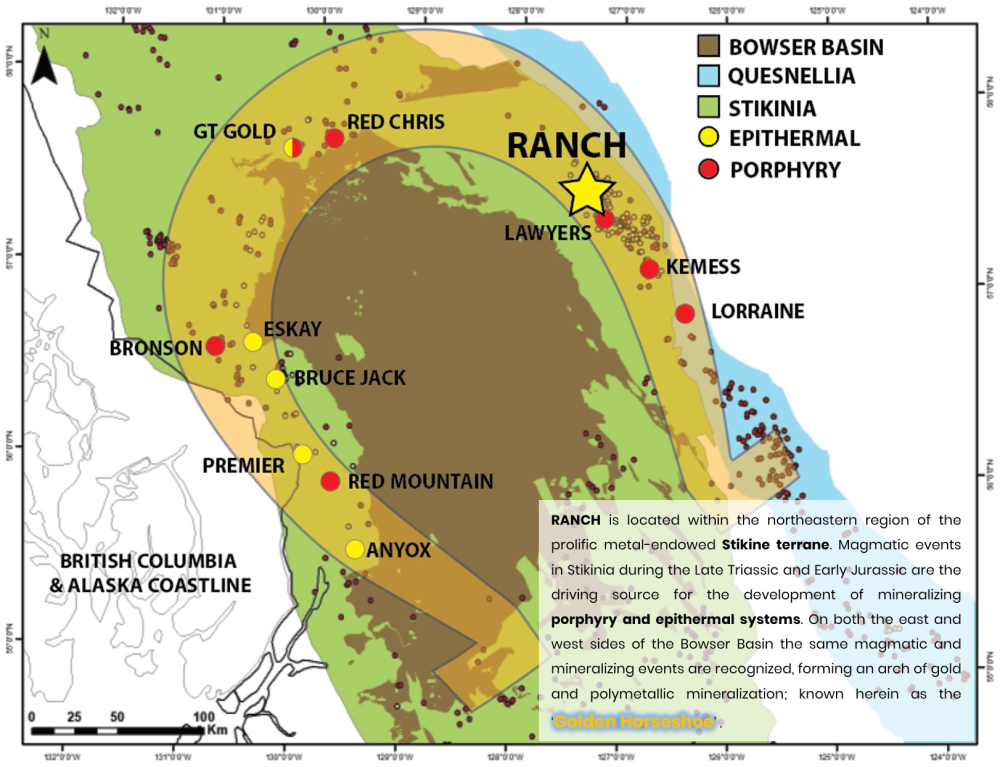 I’m actually quite familiar with the Great Bear story. The President and CEO of GBR, Chris Taylor, pitched me in early 2018 on their flagship project. I told him that I totally bought into the story. They were in elephant country and all of their fieldwork indicated a major find.

I even went so far as to say they didn’t really need me, I thought the results would be so good that the market would get it in time. All they would accomplish by hiring 321gold would be to get the market to fully understand the story a lot quicker. When they got where they were going to go, they could have a lot fewer shares than if they didn’t tell their story effectively.

I run into companies with great geological stories all the time who think they are smarter than people who spend their entire lives trying to communicate effectively. They opted to save money on 321gold by not advertising but never actually got around to telling me.

Time dragged on and on and on and the company didn’t say anything about what they were doing or if they ever intended to communicate. I had gone into the open market and bought 200,000 shares at $.50 believing in their geological prowess.

After months of non-communication from the company I figured they would never learn to communicate. I wasn’t sure I wanted to wait forever for them to finally release results. So I dumped my shares at $.53. The next day they announced their initial drill results and the shares shot higher. I could have had a sixty-fold return on my investment. But they never have been all that good at communication and I suspect a lot of investors were just like me and got bored.

Thesis does communicate. And their results certainly remind me of the young Great Bear. They have finished this year’s program and investors can expect results to come out on a regular basis well into 2022.

From a point of view of getting things under control, Thesis is better organized than most of the companies I deal with. Institutions stepped up to the plate in late June participating in a highly over subscribed $18.4 million private placement at $1.50 for non-flow through shares and $1.75 for flow through shares all with no warrants. Currently management owns about 25% of the float with institutions owning an additional 60% of the shares.

There is a tiny 15% of shares available in the public float. Do not get carried away if it looks like the stock is going to run away. It will correct. There are 20-50 guys out there looking for the next Great Bear who are going to jump on this story. Don’t get caught up in the froth.

Management has done a brilliant job of keeping finances under control with $17 million cash on hand. There are 12.1 million warrants outstanding at an average price of $.77 well into the money that would bring in an additional $9.3 million. With the price of the shares about twice that even though there is no provision for the acceleration of the warrants, as long as the stock remains liquid there will be steady selling of shares to exercise warrants.

The entire 2021 drill program had a total of 106 holes. Only seven have been released and they were brilliant. Should the remainder prove as successful Thesis will be hot on the coattails of Great Bear and on the radar of the majors. With a market cap of $66 million and $17 million in the till, that gives them an enterprise value of under $50 million with a potential $9.3 in warrant money to factor in as well. I don’t see them doing any fund raising for a long time but I do expect a giant drill program next summer. Their current stock price even after two sets of bonanza grade results is less than the price of the shares of the PP in June. That’s nuts.

The only fly in the ointment is the lack of a US OTC symbol. That needs to be a very high priority for management. The inability of US investors to easily buy shares will be a factor until management gets a US broker to set up a symbol.

When the company first approached me I had no compelling reason to buy shares and I didn’t. I even missed the drill results in October. Management did remind me of the latest results and I felt pretty stupid not owning shares. I’ll buy some on Monday. I am biased, Thesis is an advertiser so do your own due diligence. I found their presentation to be professional and easy to understand. Read it for more.