The Relationship Between Inflation and Prices

Now it is time to introduce a second factor; changes in the average cash balances held by a population.

Changes in cash balances are an expression of relative preferences between money and goods. If a population as a whole is satisfied with the stability of money as the medium of exchange, it will be happy to retain balances surplus to its immediate needs. We see this even with inflating currencies, such as the Japanese yen, where irrespective of the level of interest rates monetary expansion merely accumulates as bank deposits. It is unusual for a population to go to the extremes evident in Japan, but equally, a population which realises its currency is declining in purchasing power has every reason to dispose of it in favour of goods, maintaining lower balances in consequence.

The complete rejection of a currency as the medium of exchange renders it utterly valueless and is the common outcome to every hyperinflationary collapse. Governments that become ensnared by inflationary financing face the growing certainty of a Venezuelan outcome.

For now, monetary authorities around the world are relying on public ignorance about money and the theory of exchange. Those who trouble themselves to consider how their currency’s purchasing power is actually changing will notice how it is declining more rapidly than official statistics say. This is deliberate. After the introduction of widespread indexation in the early 1980s governments devised methods to reduce the costs incurred. Changes in statistical methodology have achieved that, with consumer price indices now entirely suppressed, so much so that central banks claim to be struggling to get the CPI to rise to its two per cent target.

The evidence from independent analysts in America such as Shadowstats and the Chapwood Index is that real world prices there are rising at closer to a ten per cent rate and have been for the last ten years. With the FMQ having grown at a monthly compounding annualised rate of 9.6% from the Lehman crisis to the end of 2019, the truth about price inflation appears closer to independent analysts’ calculation than the official CPI. Furthermore, there is little evidence of noticeable change in savings rates or cash hoarding over the period, which would have affected the general level of prices.

The first to realise that the purchasing power of a currency is declining and will continue to do so are usually those who own it for reasons other than as a normal medium of exchange. These are foreign holders who have accumulated currencies other than their own government’s fiat money as a result of trade and have chosen to retain it instead of selling it in the foreign exchanges. And there is a second group of foreign holders which has diversified investment portfolios into foreign financial markets.

These groups are primarily sensitive to external economic and financial factors, such as changes in the outlook for trade, financial asset values and their requirements to hold liquidity in their own currencies. It stands to reason that a state that manages to run continuing deficits on the balance of trade and retain an accumulation of foreign ownership of its currency is vulnerable to changes in international sentiment. This is the situation the dollar finds itself in, with US Treasury TIC figures revealing foreigners own financial securities worth approximately $20.6 trillion, and additionally bank deposits and commercial and US Treasury short-term bills totalling $6.15 trillion. In other words, foreign ownership of the dollar is 130% of the CBO’s estimate of current US GDP.

The accumulation of foreign dollar positions was due to a number of factors: the dollar is the international reserve currency, trade expectations were of continual global growth, the perpetuation of US trade deficits, increasing portfolio investment and a rising dollar. Global trade is now contracting, and the dollar has begun to decline. Commercial priorities are changing from global expansion to conserving capital.

With the global economic outlook deteriorating rapidly, the dollar is notably over-owned by foreigners, which is not counterbalanced by American ownership of foreign currencies. Most of US foreign financial interests are denominated in dollars with exposure to foreign currencies remarkably small at $714bn at end-June.[ii]

China has already declared a policy of reducing her dollar investments in US Treasury bonds and is selling her dollars to buy commodities. Few realise it, but China is doing what ordinary people do when they begin to abandon a currency — dumping it for tangible goods which will cost more in future due to the dollar’s declining purchasing power. And as the dollar’s purchasing power declines measured in commodities more nations are likely to follow China’s lead.

When you see a chart of the expansion of money supply, as illustrated in Figure 2 below and combine that with a falling dollar in the foreign exchanges, it is only a matter of time before increasing members of the domestic population begin to follow the foreigners’ lead. 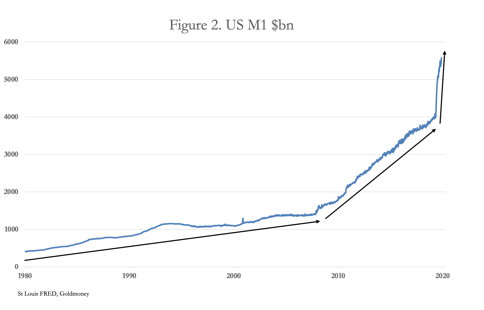 Compared with the past, there is a generation of millennials which through their understanding of cryptocurrencies has learned about the debasement of fiat currencies by their governments. It remains to be seen whether this knowledge will bring forward the general public’s understanding of monetary affairs for an earlier abandonment of money for goods.

The Relationship Between Inflation and Prices News

The Relationship Between Inflation and Prices Resources