The Monetary Logic for Gold and Silver

This week saw the news that a vaccine had been found to combat the coronavirus. At least it offers the prospect of humanity ridding itself of the virus in due course, but it will not be enough to rescue the global economy from its deeper problems. Monetary inflation is therefore far from running its course.

The reaction in financial markets to the vaccine news was contradictory: equity markets rallied strongly ignoring rapidly deteriorating fundamentals, and gold slumped on a minor recovery in the dollar’s trade weighted index. Rather than blindly accepting the reasons for outcomes put forward by the financial press we must accept that during these inflationary times that markets are not functioning efficiently.

To obtain a grasp of what is truly happening in capital markets, it is usually best to stand back and observe the broader context. Figure 1 below shows the course of three major indicators this year: the S&P 500 index as proxy for the stock market, the copper price as proxy for industrial commodities and gold as proxy for monetary inflation. 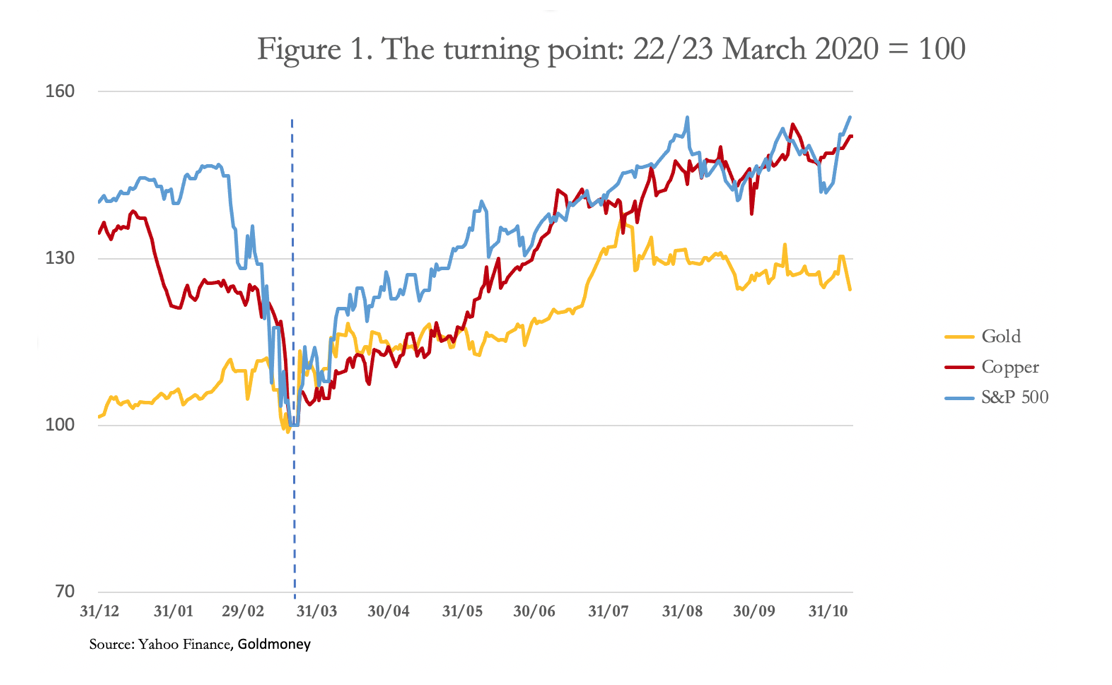 Before 22 March, the stock market had slumped along with copper, and gold had broadly flat-lined. The signals suggested that stock markets and commodity prices were discounting an economic slump, and that gold perhaps offered a haven from systemic risk, at least until it fell sharply in late March.

On Thursday, 16 March, the Federal Reserve Board cut its funds rate to zero and the following Monday, 23 March, the Fed declared unlimited quantitative easing to support the economy through what it declared would be a V-shaped recovery. In other words, an injection of money was expected to ensure economic recovery and a return to normality. March was also the month many countries entered lockdowns to combat the first wave of viral infections.

Following the Fed’s announcement, stock markets recovered sharply, being the direct beneficiaries of unlimited monetary expansion, which we discuss later. Copper recovered strongly, it was said to be on improved prospects for the global economy, but the back story here is more concerning. Following the Fed’s statement, China’s government decided to reduce its stockpile of dollars by buying key industrial commodities, particularly copper. If widely adopted by other foreigners and subsequently the American public, it is a policy that will ultimately destroy the dollar’s purchasing power.

The threat of infinite money printing to the purchasing power of the dollar drove the gold price to new highs, but it can be seen in Figure 1 that gold generally underperformed equities and copper by a significant margin. In one sentence, the reason is the establishment’s dislike and suppression of gold as a rival to fiat currencies, and ignorance in the financial community about the effects and consequences of monetary inflation.

This article is intended to put the latter right and to give the reader an advantage of knowledge in a subject which is bound to dominate financial markets and their underlying economies in the months to come.

The evolution of money and what it represents

In the pre-dawn of history, when the limitations of barter became an impediment to further human progress, two conditions needed to be satisfied. A form of intermediary good commonly accepted as a medium of exchange was indispensable so that through the division of labour and by their individual skills and knowledge, humans could maximise their output in order to acquire other goods to satisfy their needs and wants. The classical economists defined the division of labour and with it the role of money as Say’s law, after the French economist, Jean-Baptise Say (1767—1832), who described it.

The economic benefits of the division of labour are now taken for granted, even by socialists who are otherwise scathing of free markets. And the intermediary good, money, evolved to become commonly accepted by diverse communities, even those which did not trade with each other. Eventually, all civilisations accepted metallic money as the durable, reliable and quantifiable units of exchange.

In descending order of value, that which we would term their purchasing power today, metallic monies were gold, silver and copper. Before the dawn of history, when scribes began to document events, metallic money had already become established. History then recorded numerous occasions when the powerful deceived the public by corrupting money — obtaining it for themselves while forcing the public to accept inferior or worthless substitutes.

The Emperor Nero famously debased the Roman denarius to pay his troops, an act necessary for his personal survival, and a policy pursued by his successors for two centuries. In China, Kublai Khan confiscated gold, silver and precious stones, doling out paper substitutes made from mulberry leaves. From ancient times to the present day, kings, emperors and now governments more often than not were and still are heavily indebted and authorised schemes to replace gold and silver with debased coinage, or their own alternative forms of money. The public’s choice of a medium of exchange was incorruptible; a ruler’s choice was made with the intention to debase it as a source of finance.

Gold and silver had long been accepted as the medium of exchange, chosen by those that use it. The fact that its quantity could not be expanded by a government was no impediment to the advancement of national and personal wealth. The improvement of living standards throughout Europe and America in the nineteenth century was testament to the combination of free markets and sound money.

The limitations imposed by metallic money on the state’s ambitions were seen as a hindrance by socialising governments. The modern template for a resolution of the problem was the Prussian-led federation of German states, unified in 1871 by Otto von Bismarck. Accordingly, when Georg Knapp promoted his state theory of money in 1905, Bismarck furthered his statist ambitions by seizing the opportunity given by Knapp’s state theory of money to finance the expansion of Germany’s military forces, issuing marks unbacked by gold while still on a gold standard.

In August 1914 Germany’s gold exchange standard was temporarily abandoned, and when it became clear that the war was not going to be the short conflict which Germany expected to win, the purchasing power of the paper mark began to fall, collapsing to a notional trillion paper marks to one gold mark in November 1923. Other European currencies without a gold exchange standard and who put vast quantities of unbacked money into circulation also suffered monetary collapses, notably those of Austria, Hungary, Poland and Russia.

Bismarck showed in the years before the First World War that the gold standard was not necessarily protection against monetary debasement. Similarly, Benjamin Strong, the Chairman of America’s Federal Reserve Board, in the early 1920s used inflationary monetary policies under cover of the gold standard, and with the cyclical expansion of bank credit fuelled an unsustainable boom in the 1920s. The result was a stock market collapse, a banking crisis, the ownership of gold banned for American residents in 1933 and a substantial devaluation of the dollar against gold in January 1934. Gold then remained exchangeable for dollars, but only for the settlement of overseas trade.

From these changes, the current monetary situation evolved, driven by a new breed of economist which abandoned classical economics. Classical economics had emphasised the importance of free markets and the immutability of Say’s law. Instead, the mass unemployment in the 1930s was taken as evidence that free markets and the division of labour had failed, and that the state had an interventionist role to ensure that a depression would never happen again.

Despite all the evidence and a priori theory that explains the massive improvements in the human condition that arose from the division of labour and free markets, the denial of Say’s law was formalised by Keynes in his General Theory. Or rather, he skated around the subject, concluding that, “If, however, this is not the true law relating the aggregate demand and supply functions, there is a vitally important chapter of economic theory which remains to be written and without which all discussions concerning the volume of aggregate employment are futile.” Note that Keynes does not deny Say’s law as his acolytes do; he merely supposes that “If it is not the true law”.

From Keynes’s supposition he went on to invent macroeconomics, a mathematically based discipline that substituted human action with aggregates and averages. It justified the temporary budget deficits that are intended to stimulate a slumping economy by monetary inflation — deficits that have now become permanent and increasingly beyond control. By inventing an economic role for the state, Keynes opened the door to unlimited statist intervention and for the generally non-productive state to become an increasing burden on the productive private sector.

With the raison d’être provided by macroeconomics and questionable government statistics, the reliance by governments on inflationary financing has increased over time. We are now at the point when some observers of monetary history warn of hyperinflation…

The Monetary Logic for Gold and Silver News

The Monetary Logic for Gold and Silver Resources