The Form of Today’s Monetary Collapse

The first thing to consider is the current relationship of the quantity of money to the economy. US dollar M3 money supply, the broadest definition of money, has increased along with US GDP: M3 stood at $18.327 trillion last July, while second quarter GDP was estimated at $19.52 trillion. The closeness of the relationship between these two figures is explained by the nominal GDP total being inflated by increases in the money quantity. The match is never perfect, because there is always some consumer expenditure which is subject to estimates, future revisions, or simply not captured by GDP. To these we can add statistical error. Furthermore, at the beginning of the inflation there would have been a base level for GDP when money was sound from which subsequent inflations occurred.

The degree of the dollar’s loss of purchasing power is deliberately understated in official statistics. Originally, the policy was to reduce the cost to US and other governments of indexation introduced following the 1970s decade of price inflation. It is remarkable that the statistical suppression of changes in the general level of prices, now adopted in all advanced economies, is rarely questioned. Consequently, the scale of the fall in the purchasing power of fiat currencies has been ignored with some important consequences, at least for governments and their central banks, which are concealing evidence of the failures of monetary and economic policies.

Figure 2 compares the cumulative increase in the general level of prices measured by the CPI, and the Chapwood index — comprised of “the top 500 items on which Americans spend their after-tax dollars in the 50 largest cities in the nation”. The Chapwood price inflation numbers used in the chart are the arithmetic average of the fifty cities, the last data points being end-June 2020. Additionally, the growth of M3 money supply is included. 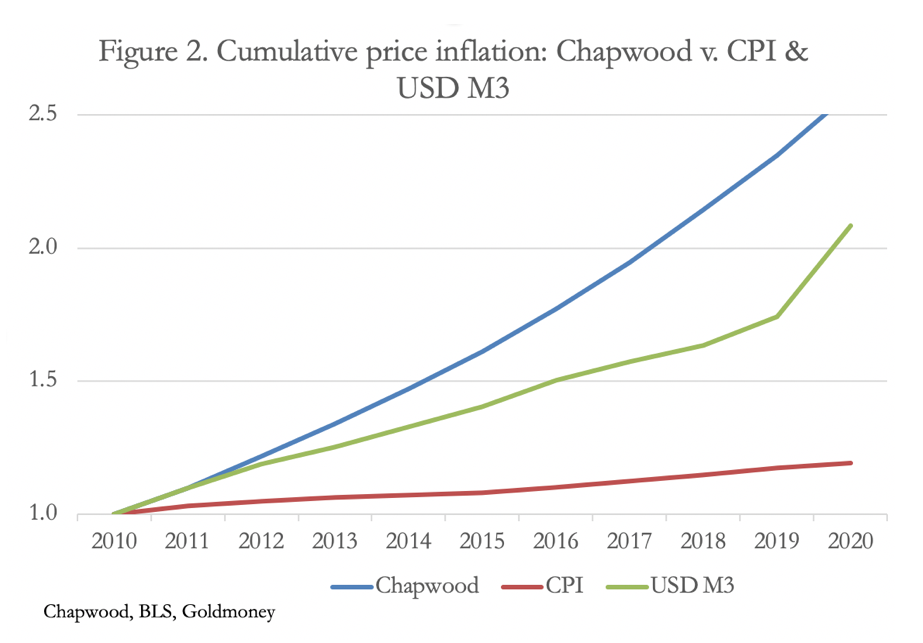 It should be clear that changes in the general level of prices are a theoretical concept which cannot be measured, because it is different for every individual. An average is therefore no more than an indication, even assuming the evidence is not manipulated by vested interests. Bearing this in mind, the cumulative price effect of the official cities’ CPI over the last ten years is for it to have risen by only 19%, compared with the Chapwood index which rose 159%, compounding by about 10% annually. By way of confirmation that the Chapwood figures are closer to the truth, we see that USD M3 diluted the dollar by increasing 109% over the period.

The lower increase in USD M3 relative to that of the Chapwood index suggests that as well as the dilution of the dollar’s spending power in a general sense, holdings of money have also been reduced relative to the commonly bought goods in the Chapwood index. In other words, consumers appear to show a relative preference in their spending for their common purchases over their less common purchases. This could be taken to be evidence of the earliest stages of a reduction of money balances in favour of everyday purchases. It is inconsistent with the official story upon which monetary policy is based, whereby the monetary authorities and their epigones delude themselves that price inflation is contained by the two per cent annual target, with some of them even claiming price inflation is banished for ever.

Figure 3 further illustrates the ineffectiveness of monetary policy by expressing GDP in 2010 prices adjusted by the CPI (the state’s version of real GDP), by the Chapwood index and finally by M3 money supply. 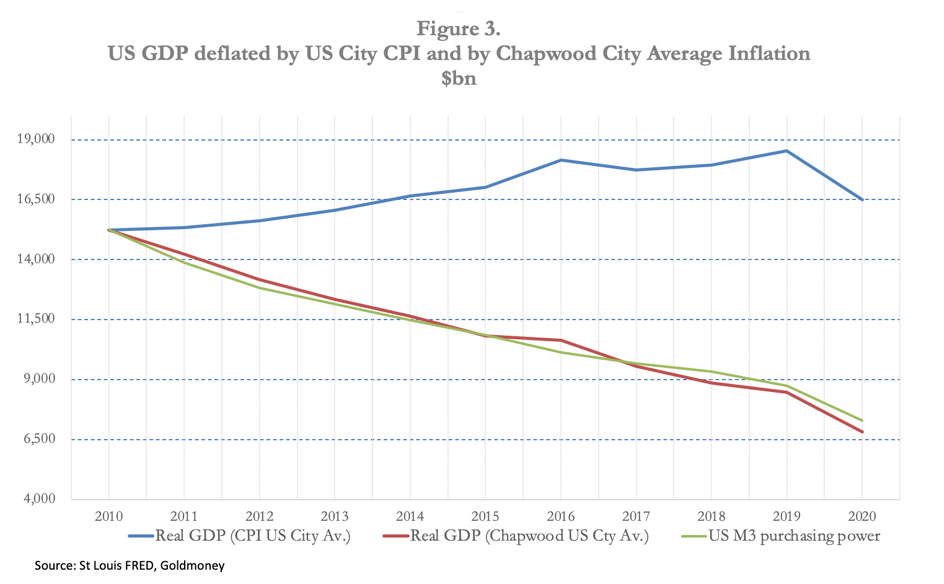 The monetary authorities claim that before the coronavirus crisis they had stabilised the US economy following the Lehman crisis. Measured by the CPI, by end-2019 the economy had grown by nearly 22% over nine years “in real terms”. But because the CPI is a heavily supressed measure of price inflation, the truth is different. The Chapwood index and USD M3 tell us that adjusted by these measures, GDP has more than halved from $15,241bn to $6,818 and $7,309bn respectively, measured by a base of 2010 dollars.

To be clear, GDP is simply a money total of all recorded transactions. It does not tell us anything about their quality, or indicate the degree of economic progress, or the lack of it. As always, there have been winners and losers. We can only conclude in the most general of terms that the contraction of real values has exposed the failure of monetary and economic policies.

Where it really matters is for governments, and the purchasing power of the taxes they collect.

A modern socialising government never reduces its expenditure, and budget deficits arise as a result of a reluctance to increase taxes to match spending. Prima facie it is evidence of an emerging hyperinflation, in that the decline in the purchasing power of the currency is driving the fall in the real value of taxation receipts, while at the same time it is realised that to raise taxes would be harmful to production, consumption, and therefore government finances.

Then came the coronavirus, an unexpected hit to nominal GDP, upon which government tax income depends. And now we have a second covid-19 wave, the economic consequences of which can only be guessed. Let us not forget that before all this happened, last September there was an emerging liquidity crisis evidenced by the failure in the dollar repo market, indicating, in all likelihood, the end of bank credit expansion. And we should also remember that the trade tariff war between the world’s two largest economies brought the growth of international trade to a sudden halt.

Anyone with an eye for the economic consequences of all these developments can only conclude that in addition to the already growing gap between government spending and tax receipts, governments are not just having to rescue their tax bases from a one or two-off hit from the coronavirus, but further rounds of inflationary expansions will follow at an increasing pace. Purely in terms of money quantities, hyperinflation is already well entrenched for the US dollar and all other fiat currencies subject to the same political and factual dynamics.