The Emerging Evidence of Hyperinflation

No doubt, the reluctance to reduce, or at least contain budget deficits is ruled out by the presidential election in November. But whoever wins, it seems unlikely that government spending will be reined in or tax revenue increased.

For the universal truth of unbacked state currencies is that so long as they can be issued to cover budget deficits they will be issued.
And as an inflated currency ends up buying less, the pace of its issuance all else being equal will accelerate to compensate. It is one of the driving forces behind hyperinflation of the quantity of money.

Since the Lehman crisis in August 2008, the pace of monetary inflation has accelerated above its long-term average, and the effect is illustrated in Figure 1 below. 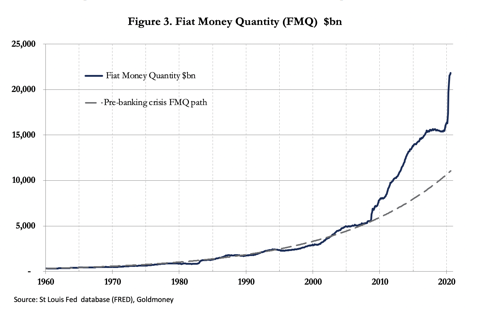 Figure 1 includes the latest calculation of the fiat money quantity, to 1 August 2020. FMQ is the sum of Austrian money supply and bank reserves held at the Fed — in other words fiat dollars both in circulation and not in public circulation.

Because commercial banks are free to deploy their reserves within the regulatory framework, either as a basis for expanding bank credit or to be withdrawn from the Fed and put into direct circulation, whether in circulation or not bank reserves at the Fed should be regarded as part of the fiat money total.

It can be seen that the rate of FMQ’s growth was fairly constant over a long period of time — 5.86% annualized compounded monthly to be exact — until the Lehman crisis when the rate of growth then took off. Since Leman failed in 2008 FMQ’s total has grown nearly 300%.

Since last March growth in the FMQ has been unprecedented, becoming almost vertical on the chart, triggered by the Fed’s response to the coronavirus.

And now a second wave of it has hit Europe and the early stages of a resurgence appears to be hitting the land of the dollar as well. With lingering hopes of a V-shaped recovery being banished, a further substantial increase in FMQ is all but certain.

Already, FMQ exceeds GDP. If we take the last time things were normal, say, in 2005 when the US economy had recovered from the dot-com crash and before bank credit expansion and mortgage lending become overblown, we see that in a functioning relationship FMQ should be between 35%—40% of GDP.

But with the US economy now crashing and FMQ accelerating, FMQ is likely to be in excess of 125% of GDP in the coming months.

What is the source of all that extra money? It is raised through quantitative easing by the central bank in a system that bends rules that are intended to stop the Fed from just printing money and handing it to the government. Yet it achieves just that.

The US Treasury issues bonds by auction in the normal fashion. The major banks through their prime brokers bid for them in the knowledge that the Fed sets the yield for different maturities through its market operations.
The Fed buys Treasury bonds up to the previously announced monthly QE limit, only now there is no limit, giving the primary brokers a guaranteed turn and crediting the selling banks’ reserve accounts with the proceeds.

This arm’s length arrangement absolves the Fed of the sin of direct money-printing but evades the rules by indirect money-printing. The Treasury gets extra funding through this roundabout arrangement. Participating banks generally expand their bank credit to absorb the new issue, which they then sell to the Fed, which in turn credits the banks’ reserve accounts.

The Treasury gets the proceeds of the bonds to cover the deficit in government spending, and the banks get expanded reserves. The Fed’s balance sheet sees an increase in its liabilities to commercial banks and an increase in its assets of Treasury bonds. The Fed also funds agency debt in this manner, mostly representing mortgage finance.

Under President Trump, the Treasury’s current deficit initially expanded as a planned supply-side stimulus to the US economy to the tune of just over a trillion dollars before covid-19 created additional financial chaos. Businesses experienced severe dislocation and have suffered a widespread collapse. Consequently, and together with the direct injection of money into each household, the Congressional Budget Office revised its trillion-dollar deficit for the financial year just ended as the following screenshot from its website indicates:

Note how half the government’s income arose from revenues and half is covered by sales of government debt to the public (i.e. the commercial banks), which at the end of fiscal 2020 (ended yesterday) is estimated to total $20.3 trillion.

But given that the first half of that fiscal year was pre-lockdown and the annualized rate of the deficit at that time was about a trillion dollars, simplistically the annualized rate of the deficit’s increase since last March is in the region of $4.4 trillion.
Incidentally, the CBO’s economic projections look too optimistic given recent events, in which case budget projections for this new calendar year will be adjusted for considerably lower revenue figures, and significantly greater outlays at the least.
– Source, James Turk’s Gold Money

The Emerging Evidence of Hyperinflation News

The Emerging Evidence of Hyperinflation Resources