The Destruction of the Euro

If ever there was a political construct the unstated objective of which is to enslave its population, it is the European Union. Its opportunity stems from national governments which, with the exception of Germany and a few other northern states, had driven or were on the way to driving their failed states into the ground. The EU’s objectives were to support the policies of failure by corralling the accumulated wealth of the more successful nations to fund the failures in a socialistic doubling-down, and to accelerate the policies of failure to ensure that all power resides in the hands of statist looters in Brussels.

It is Ayn Rand’s vision of the socialising state as looter in action.[i] All of surviving big business is aligned with it: those who refused to play the game have disappeared. Senior executives with extensive lobbying budgets are no longer at the beck and call of contentious consumers and have hollowed out their smaller competitors. They have opted for the easier non-contentious life of seeking favours of the looters in Brussels, enjoying the champagne and foie gras, the partying with the movers and shakers, and the protection they bribe for their businesses.

It is a corrupt super-state that evolved out of American post-war policy — the child of the American Committee of United Europe. Funded and staffed by the CIA in 1948, the committee’s objectives were to ensure the European countries bought into a US-controlled NATO, in the name of stopping Stalin’s westwards expansion from the post-war boundaries. This was the official story, but it is notable how it formed a template for subsequent American control of other foreign states. It is the action of the jewel wasp that turns a cockroach into a zombie, so that its lava can subsequently feed off it.

This European cockroach is now in the final stages of its zombified existence. In Brussels they don’t realise it, but they are partying into the dawn of the next world, and they will have nowhere left to go. Outside of the Brussels hothouse and EU capitals it is hard to discern any support for a failing political system, beyond simply keeping the show on the road. The German population grumbles about lending their money to economic failures, but like any creditor deep in the hole they will remain blind to the deeper systemic problem for fear of its collapse. At the other extreme are the Greek socialists who claim Germany still owes them for their brutality and destruction seventy-five years ago. It is a Faustian pact between creditors and debtors to ignore the reality of their respective positions. It is the method of imperialism; but instead of being applied to other nations, Brussels applies imperial suppression to its own member states. And now that they been hollowed out, there is nothing left to sustain Brussels.

This is the destination they have arrived at today. Brussels and its European Parliament are nearing the end of their ridiculously expensive and pointless pig-on-pork socialising destruction. Not only have the panjandrums no one left to rob, nowhere left to go, but they have bankrupted a whole continent. Surely, the robbing of the rich and giving to the poor is close to its end. The creditors and debtors have nothing material left — money in everyone’s balance sheet will be written off through a monetary and economic collapse. It is the process of it and the destination we must analyse.

The Eurozone’s banking system is a heartbeat from collapse, as will become evident in this article. There are two basic elements involved. At the bottom there are the commercial banks with rapidly escalating non-performing loans, a phrase which hides the truth, that they are irretrievable bad debts. At the top is the Eurozone-wide settlement system, TARGET2, which is increasingly used to hide the bad debts accumulating at national levels.

Before we look at the position of the commercial banks, in order to understand how toxic the Eurozone has become we will start by exposing the dangers hidden in the settlement system.

The Chickens Are Coming Home to Roost

The imbalances between the ECB and the national central banks in the TARGET2 Eurozone settlement system are indicative of the current situation. 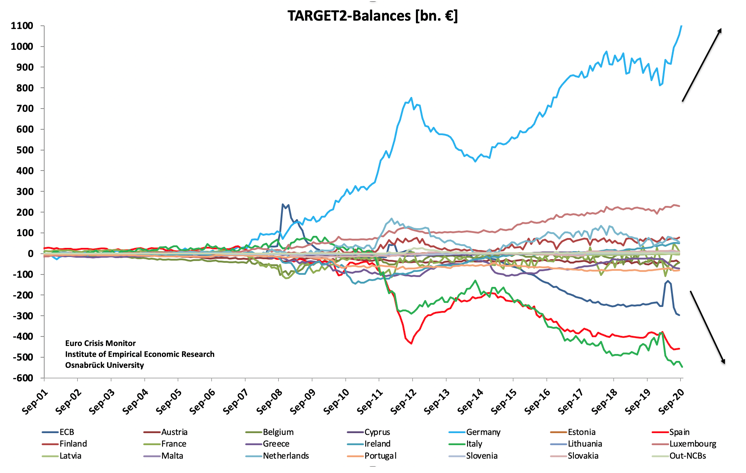 Germany (light blue) is now “owed” €1.15 trillion, an amount that has escalated by 27% between January and September. At the same time, the greatest debtors, Italy, Spain and the ECB itself have increased their combined debts by €275bn to €1.3 trillion (before September’s additional deterioration for Spain and the ECB are reported — only figures up to August for them are currently available). But the most rapid deterioration for its size is in Greece’s negative balance, increasing by €45.6bn between January and August.

Is the Bundesbank worried by the increasing quantities of euros owed to it in a system that was always intended to roughly balance? Certainly. Will it publicly complain, or privately demand they be corrected? Almost certainly not. For statist systems such as the EU depend entirely on total obedience towards a common objective. All dissenters are punished, in this case by the waves of destruction that would be unleashed by any state refusing to continue to support the PIGS. TARGET2 is a devil’s pact which is in no one’s interest to break.

The imbalances are all guaranteed by the ECB. In theory, they shouldn’t exist. They partially reflect accumulating trade imbalances between member states without the balancing payment flows the other way. Additionally, imbalances arise when the ECB instructs a regional central bank to purchase bonds issued by its government and other local corporate entities. As the imbalances between national banks grew, the ECB has stopped paying for some of its bond purchases, leading to a TARGET2 deficit of €297bn at the ECB. The corresponding credits conceal the true scale of the deficits on the books of the PIGS national central banks. For example, to the extent of the ECB’s unpaid purchases of Italian debt, the Bank of Italy owes more to the other regional banks than the €546bn headline amount suggests.

The Destruction of the Euro News

The Destruction of the Euro Resources