The Course of a Currency Collapse

The end of fiat currencies is likely to come sooner than later, from the consequences of today’s massive money-printing, particularly of dollars. Already, US government spending is financed substantially more by currency debasement than taxes, a condition that will almost certainly continue to deteriorate rapidly in the coming months. Furthermore, the global banking system, which is extremely thinly capitalised, faces a tsunami of bad debts which can only lead to a systemic failure — most likely in the Eurozone initially, but threatening all other jurisdictions through counterparty risks. It is coming to a head and is likely to happen soon, possibly triggered by the second covid wave.

Long before the two or three years required for any CBDC to be operational, the world’s reserve fiat currency, the US dollar, is already hyper-inflating. There are signs the markets are beginning to understand this. Bitcoin’s price has risen sharply, sending signals to everyone that the differential between its ultimately fixed quantity and the accelerating rates of fiat currency debasement is feeding dramatically into the price.

Despite the economic slump, equity markets are being driven to new highs as non-financial customers deem stocks to be preferable to bank deposits. It has not helped that the Fed reduced deposit rates to zero last March, well below everyone’s time preference. The Fed has also promised infinite QE in order to fund the fiscal deficit. Therefore, it is not surprising that individuals and corporations are shifting out of cash balances into financial and other assets, with the notable exception of fixed-interest bonds. Rising commodity and raw material prices are also telling us that dollars are been sold in those markets.

This is the point being missed in all commentaries: the mounting evidence that markets, being forward-looking, are beginning to abandon the dollar. And once it goes beyond a certain point, nothing will reverse a rapid loss of purchasing power to the point of worthlessness. To avoid this outcome central banks led by the Fed must immediately abandon inflationary financing of budget deficits.

That is not going to happen. In addition to the current hyperinflation must be added the inflationary cover for the costs and consequences of rescuing a failing global banking system. The costs are immediate, in that governments will take on their books everyone’s bad debts. The consequences are that through their central banks they will have no political alternative other than to counter the economic slump through yet more money printing. 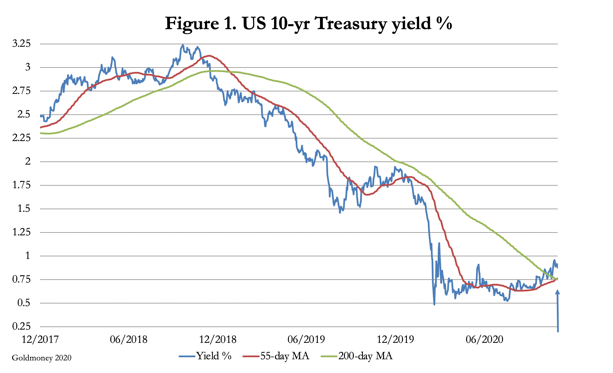 The up-arrow at the bottom-right of the chart shows that the downward momentum for the bond yield has reversed, forming a golden cross; that is to say the yield is above its two commonly followed moving averages which in turn are forming a cross with the 55-day moving average rising above the 200-day moving average, a strong indicator of a major turning point and of higher bond yields to come. The upward turn of bond yields is to be viewed in the context of the dollar’s trade weighted index, which is shown in Figure 2.

Currently standing at 92.40, if the dollar’s TWI breaks below 91.75 (the low on 1 September) it is likely to head significantly lower. With foreign holdings of dollars and dollar denominated financial securities totalling almost $27 trillion, the chances are that dumping of the dollar on the foreign exchanges will increase rapidly. That being the case, the Fed will not only be funding the unprecedentedly high (for peacetime) budget deficit but will have to absorb foreign sales of US Treasuries and dollars in order to keep the cost of government funding suppressed.

Evidence is mounting that it cannot be done. And with the end of the suppression of interest rates comes the collapse of accumulated malinvestments, of government finances, and of the currency itself.

The Course of a Currency Collapse News

The Course of a Currency Collapse Resources