Bob Moriarty of 321Gold shares his thoughts on his 18 years of experience with Pacific Ridge Exploration Ltd. and its current projects in British Colombia, Canada.

Canadian companies are interesting because they are much like cats; they seem to have nine lives.

I worked with Pacific Ridge Exploration Ltd. (PEX:TSX.V) 18 years ago when they were under totally different management drilling a gold project in Nevada that never went anywhere. The company pretty much faded away for many years but it’s back with a giant copper hit in British Columbia.

While the name of the company has been around for a long time, essentially the company is brand new starting to move forward in early 2020 when they entered into an earn-in with Aurico Metals on the Kliyul-Redton projects.

PEX can earn 51% of the two properties by paying Aurico $100,000 and issuing two million shares and spending $3.5 million in exploration. They can earn an additional 24% in the projects by paying Aurico an additional $60,000 in cash, issuing 1.5 million shares and spending $3.5 million more for exploration. Kliyul has an underlying 2% NSR while Redton has a 2.5% NSR that can be reduced to 1% for $2 million.

Early in 2021 the company got serious about moving forward with a financing of eight million Flow Through units at $.142 to raise $1.136 million. Gerald Carlson was appointed the Executive Chairman and Blaine Monaghan picked as President and CEO. In June of 2021 the company did another financing of $1.5 million by selling ten million shares at $.15 with a share and a half warrant good for two years at $.23. Crescat Capital took seven million of the unit in the financing.

The financing was intended to raise enough money to advance their flagship Kliyul copper project with a 2,500-meter diamond drill program. The property had been drilled with good results going back as far as 1974.

The company has additional projects in the Yukon but for today I’m going to focus on the Kliyul property because that is where they recently made the giant copper hit that has driven the shares from a low of $.11 two weeks ago to a high of $.37 on December 8th.

Prior drilling at the KMZ area of the Kliyul project was done for near surface skarn material with both copper and gold mineralization. In 2015 management of Aurico made the decision to drill deeper in the hopes of finding a porphyry gold-copper system. The results tapped into some excellent numbers including 20.4 meters of 0.39 Cu and 2.55 g/t gold in hole KL-15-34.

That was the last drilling at Kliyul until PEX began their 2,500-meter program in early August. Due to delays caused by a local wild fire the company was only able to finish three holes with a total of 1,544 meters of diamond core.

Pacific Ridge released the first of three holes from Kliyul on December 1st. The results were exceptional and as good or better than most of the copper/gold porphyry mines in the Quesnel Trough in Central British Columbia.

Company president Blain Monaghan reported the results as 437 meters of 0.61% CuEq or 0.96G/t AuEq starting from the top of bedrock at 12 meters. 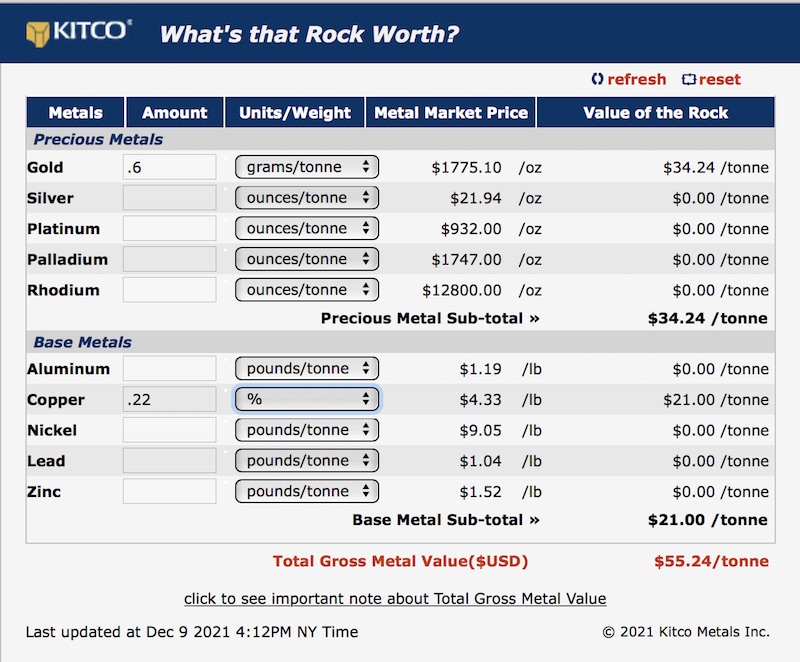 The top of the hole was in skarn. Typically that is higher grade than an underlying porphyry. Indeed the assays showed the first 53 meters of 1.17 AuEq. But much to the surprise and pleasure of existing investors and management, the last 141 meters of Hole KLI-21-036 produced numbers of 0.36% copper and 1.11 G/t Au and was stopped in in a dike due to stability issues with the drill rig. The company believes mineralization would continue once through the dike. 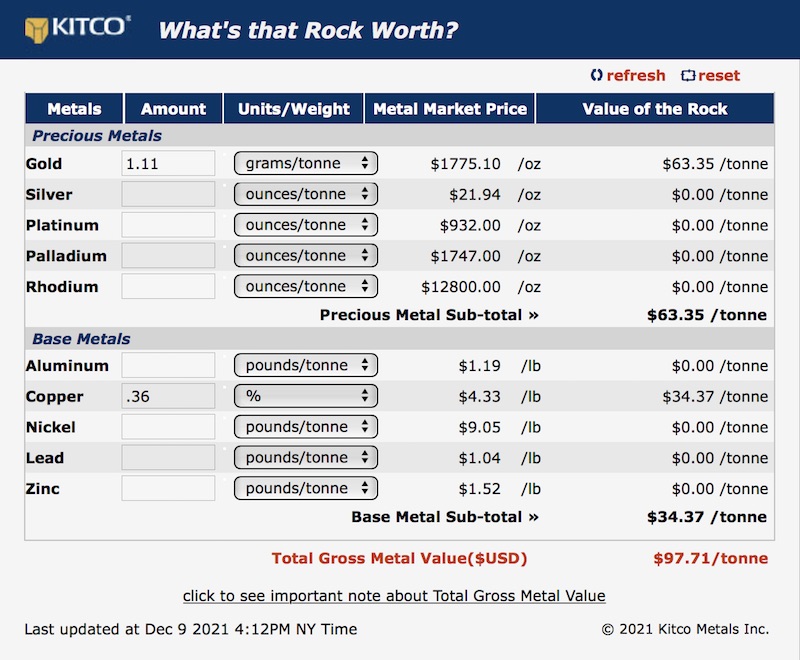 There is always a calendar issue with drilling projects in BC and the Yukon. Typically the results would come out in a month after completion of the drill program but the Covid stupidity has beaten up all junior resource companies everywhere will delays of three to four months at times. With the BC and Yukon projects, the news is sparse from the release of assays in the fall until drilling begins in the last spring of the next year and investors are looking for action.

Pacific Ridge will need to raise money for a bigger drill program next year. They don’t want to do it at current prices. There are two more holes still to be released. Holes 37 and 38 look visually to have hit the porphyry and should the results be as good or better than hole 36, look for the stock to run. There is an overhang currently from the investors from a year ago with shares bought in 2020. The shares were as cheap as $.05 one year ago so a lot of investors will be happy to take a 500% profit. But once the overhang is removed, I expect the shares to move higher, perhaps much higher depending on the next two holes.

Pacific Ridge’s partner in these two projects is a holding company owned by Centerra. They are described as a mining royalty and development company with a 1.5% NSR on the Young-Davidson Gold Mine and 2% NSR on the Fosterville Gold Mine in Australia. I don’t see them wanting to be a junior partner with PEX on Kliyul so there is a good chance they might redo the deal to enable PEX a larger share of the pie in exchange for a more serious drill program. A 2 or 3% NSR on a big high-grade copper/gold porphyry in BC would be right up their alley.

When I first saw the results from the one hole released a week ago I made my mind up to buy some shares. I picked some up at $.23 and more at $.35 and was thrilled to get them. Pacific Ridge has become an advertiser so naturally that makes me biased. Please do your own due diligence.