One of the hottest regions for gold exploration in Canada is the James Bay Lowlands, where several significant gold discoveries have already been made and one has become one of the country’s largest primary gold mines. One junior seeks to take its discovery to the next level, and recent drilling suggests it is on the right path.

QPM has a 142-square-kilometer land package along a greenstone belt and controls a 23-kilometre-long geological contact that is favorable for gold mineralization.

The junior continues to wait for assay results from hole 189 on the La Pointe Extension, but QPM CEO Normand Champigny says the drilling results suggest that the continuity of mineralization at the La Pointe Extension mean that it could be mined by open-pit methods ­— much cheaper than underground mining but often more difficult to permit.

“These results are the best to date at the La Pointe Extension and validate our belief that the central portion of the deposit continues at depth with greater mineralized widths. I would say to investors, the more we drill to the southwest to the South Point State extension, the better it gets. And that’s why we keep focusing on that. We could be at the tip of the iceberg,” QPM CEO Normand Champigny told Streetwise.

The assay results from hole 189 could be published as early as next week, whereas the winter drill results are expected in April.

Those results will be the next catalyst for the share price, followed by the company’s maiden resource estimate in Q3. The resource calculation will use data gleaned from all 40 of the holes drilled to date into the La Pointe Extension and the total ounces for Sakami is expected to approach 2 million. 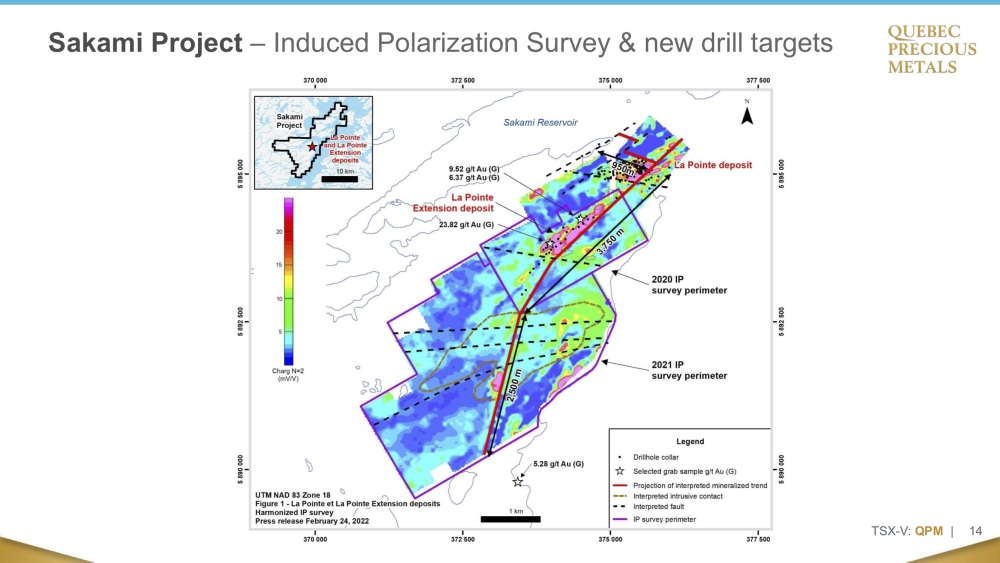 Induced-polarization surveys by QPM point to more potential along strike at the La Pointe Extension, including what Champigny describes as different anomalies 2.5 km along strike south of the La Pointe deposit that are associated with a “large intrusive body.”

QPM has traced the La Pointe Extension deposit over a strike length of 3,750 meters and to at least 400 meters below surface. The company’s 3-D model suggests the mineralization is about 41 meters thick at the edges, while as much as 75 meters thick in the central part of the deposit.

“We have expanded significantly the known volume of mineralization and are encouraged by the interpreted large intrusive body. The 2021 IP results indicate that the La Pointe Extension deposit continues to the south over a target area similar in size to the deposit that we are currently drilling based on the 2020 IP results,” said Champigny.

IP puts electrical current into the ground through electrodes to allow geophysics technicians to measure the voltage response. The measurements determine the chargeability of the hosting metallic minerals, particularly sulphide minerals like pyrite (known to host precious metals). A higher concentration of chargeable material will usually produce a stronger response.

QPM has also done some early-stage metallurgical work on samples taken from the La Pointe Extension.

“We have done a preliminary examination of the mineralogy, which showed that the gold was free, sometimes attached to sulphides. We did a test using conventional techniques. And we got recoveries from 90%, to up to 99%. No deleterious elements,” said Champigny.

One noteworthy event for QPM is that Jean-François Meilleur stepped down as president and director in late January. The role of president has not been filled, but Meilleur remains a significant shareholder. Champigny says he thanked Meilleur for his contributions to QPM and that it’s “business as usual.”

QPM is funding its exploration efforts in part through the sale of non-core assets. The last asset to go is QPM’s 50% stake in the Matheson joint venture, a gold exploration play near the Hoyle Pond mine in northern Ontario’s Timmins camp. Champigny expects the sale to close soon and will provide some non-dilutive financing.

“We’ve been very successful monetizing our non-core assets. We expect (Matheson) to close shortly. And we expect that to bring in around $500,000 cash and shares,” Champigny told Streetwise.

Goldcorp — before it was acquired by Newmont in January 2019 — bought into the newly formed QPM with an investment of CA$3.7 million. Newmont, which operates the nearby Éléonore underground gold mine, has since participated in further financings and owns about 13%.

Government-backed Caisse de Dépôt et Placement du Québec bought in at the same time, at the same terms as Goldcorp. It and other Québec institutions own about 12%. QPM management owns about 2%.