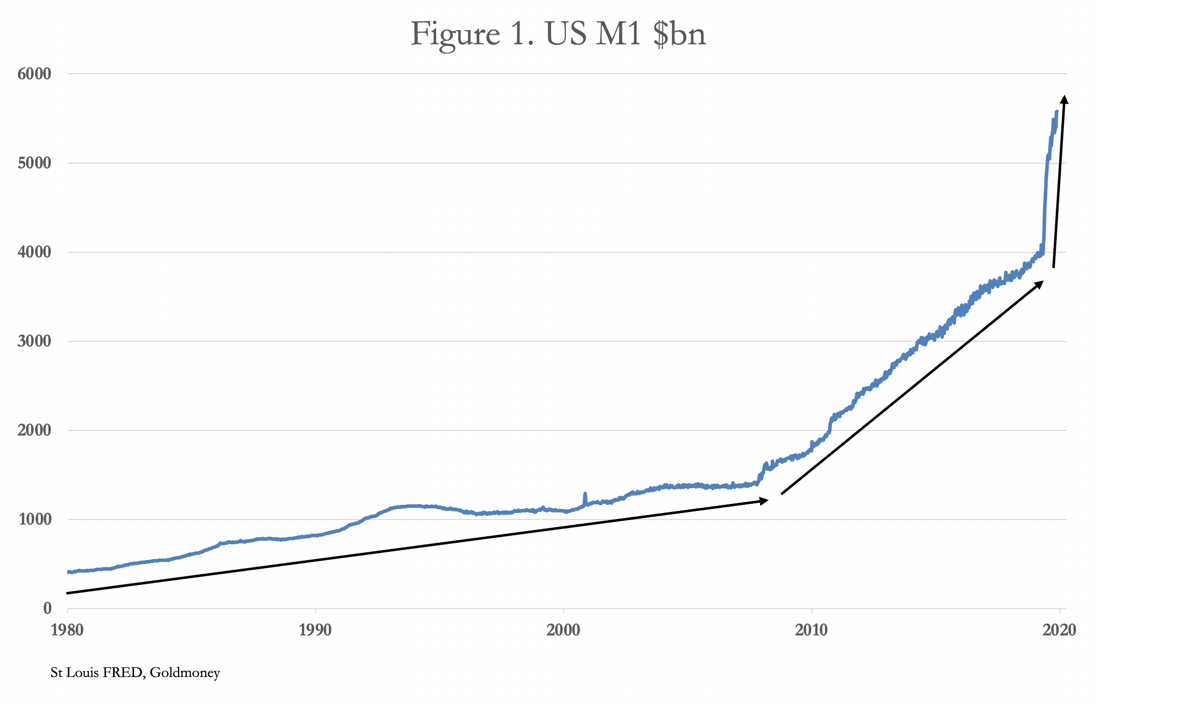 The progression of annualised monetary inflation from under 6% before the Lehman crisis, to 9.6% subsequently until March this year, and 65% in the thirty weeks since is clear from the chart. If the monetary authorities have the knowledge, the mandate, the authority, the ability and the desire to stop inflating the currency, we would not describe it as hyperinflation, instead deeming it to be no more than a brief period of exceptional inflation before a return to sound money policies.

But sound money was emphatically discarded in 1971, when the post-war Bretton Woods agreement was finally abandoned — not that the monetary regime at that time was in any way sounder than Adam’s fig leaf was an item of clothing. For the fact of the matter is that sound money in America was arguably abandoned long ago, with the founding of the Fed at Jekyll Island before the First World War.

As a means of funding government deficits, inflation is capable of being stopped by cutting government spending and/or raising taxes. But now, a one-off increase of 65% of narrow money is to be followed by another massive expansion already in the wings. The hope is that that will be enough, just as the original 65% increase in M1 was hoped to be enough to ensure a V-shaped recession would be followed by a return to normality.

The early stages of a hyperinflation are always seen by the monetary authorities as the only policy to pursue. They convince themselves that there are either no consequences, or that they can be controlled. An example of the genre is found in a paper by Michael T Kiley, a senior Fed economist.[ii] In August he concluded that the lack of further room to cut interest rates to deal with the coronavirus requires quantitative easing to a total of 30% of GDP, or $6.5 trillion, to offset the lack of room for manoeuvre on interest rates. Kiley writes that about $3 trillion had been enacted between end-February and end-June, leaving a further $3.5 trillion to come. If we assume the full $6.5 trillion stimulus is enacted by next February, then the increase reflected in narrow money could be to more than double it.

Kiley wrote his paper before the second coronavirus wave commenced. He was modelling an economic contraction measured in real GDP of just 10% in the second quarter (actually 9.5% — not to be confused with the annualised rate reported at 32.9%). But, as I pointed out in last week’s article, with monetary inflation running at such a rate, a dollar last February is not the same as an inflated dollar next February, being diluted on Kiley’s figures by $6.5 trillion. The consequence is some extremely damaging intertemporal shifts, as described in the Cantillon effect, whereby ultimately both productive workers and the poorest in society lose savings, salaries and social security benefits through loss of the dollar’s purchasing power for the benefit of the government, its agencies, and big business.

In his economic model, Kiley flattens the Phillips curve, apparently in an attempt to goal-seek a preferred outcome. The Phillips curve is meant to replicate graphically the relationship between inflation and unemployment, the idea being that an increase in price inflation goes along with a reduction in unemployment. Flattening it is the same as assuming that at a deemed level of full employment prices will not rise as much as previously modelled. But it is one thing to forecast such a relationship when the inflation “stimulus” is in the order of a few per cent, when arguably the public is more aware of the stimulation effect of monetary inflation than they are of the dilutionary effect on the money, but it is another matter when it is as dramatic as it is today.

We must resist the temptation to accept a mathematical relationship between prices of goods and services and the rate of employment, such as predicted by the Phillip’s curve. Whatever the level of employment, production adjusts because of the division of labour. In their dismissal of Say’s law, modern economists fail to realise that production and consumption broadly march or retreat together. Other than users of currency being temporarily conned by the initial effects of monetary stimulation, there is no enduring relationship between the quantity of money and employment.

Errors introduced by the mathematical economists through artifices such as the Phillips curve conceal the consequences of policies based on their forecasts at the outset. Consequently, the recommendations of senior economists at the Fed using economic models based upon macroeconomic assumptions give false comfort to the committees they advise. Furthermore, the annualised rate of the budget deficit since March was about $4.4 trillion, financed entirely through monetary expansion and significantly greater than covered by declining tax income.

If these conditions persist in the new fiscal year — which seems increasingly certain, Kiley’s calculation of the further $3.5 trillion stimulus underestimates the problem. According to an op-ed by Allister Heath in today’s Daily Telegraph, Larry Summers, the US economist and arch-inflationist, believes that the cost of covid-19 will reach 90% of US GDP, substantially more than Kiley’s estimate of 30%. Over-dramatic perhaps; but can we envisage that the forthcoming stimulus package, and then undoubtedly the one to follow that, will restore normality and set the budget deficit firmly in the direction towards a balance? If the answer is no, then we already have hyperinflation.