Precious metals expert Michael Ballanger explains why he believes the precious metals are breaking free of the gravitational pull of the last 15 months and are in the early stages of escape velocity.

“In physics (specifically, celestial mechanics), escape velocity is the minimum speed needed for a free, non-propelled (non-manipulated) object (asset) to escape from the gravitational influence of a massive body (resistance), thus reaching an infinite distance from it (breakout).”

Having just witnessed the singular most impressive performance for gold since March of 2020, last week marked the passing of a couple of significant milestones with the first being the seemingly inescapable pull of the three moving averages (50, 100, 200-day) and of even greater significance was the second: it was the first Non-farm Payroll Report (“jobs report”) Friday where the number came in as a significant “beat” (higher than Street forecasts) but where gold and silver refused to decline. In fact, not only did gold rise against a strong U.S. dollar, but it also blasted through and away from resistance, closing on the highs for the day and the week.

As the chart of Friday’s action clearly displays, it was a spectacular performance and as I tweeted out mid-session, it certainly has the feel of the arrival of a new paradigm and one that has taken far too long and way too many casualties along the way.

I am a confirmed gold and silver “bull” but far from the dubious classification as gold “bug” with the distinction being that a gold “bug” only buys gold while a gold “bull” can engage in metachrosis, transforming to a gold “bear” at the drop of a pin.

Mind you, I used to be a “bug” years ago but due to the constant emotional and financial torture delivered at the hands of traders under direct orders from central bank chieftains, I learned the hard way to be a chameleon. In order to survive in the lawless world of gold trading, you either buy physical and tuck it away for the millennia or you think like a hard money adherent but trade like a bullion bank behemoth. You sell breakouts and you buy breakdowns; when they tell you to look up you look down; and when the Fed says there is no need for inflation protection because it is “transitory,” you smile and nod your head while dumping every last disinflation/deflation-friendly asset in your portfolio. 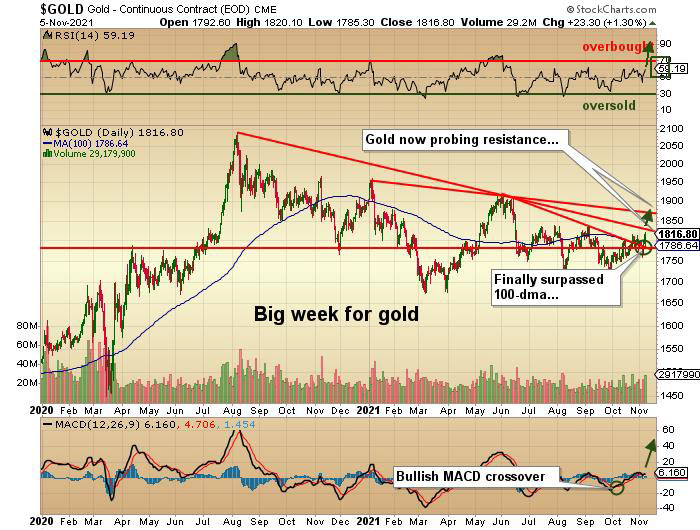 The chart to the right dates back to 2020 and provides clues to the two major areas of resistance now in front of the gold market. The downtrend line off the August 2020 top at US$2,089 and the May 2021 top at US$1,919 puts resistance literally right where we closed on Friday (US$1,820 basis December futures).

Now, the last two times RSI moved to overbought status were August 2020 and May 2021 so here in November with RSI at 59.19, it will take another $75–100 of upside thrust to move the RSI needle into the danger zone red-line. As for the MACD, there was a bullish crossover around the beginning of the month and based upon how far MACD has advanced, there is also a great deal more room on the upside before things get stretched.

Bottom line: While resistance is formidable and bullion bank interference a concern, the technical set-up for gold has not been this strong since March 2020.

The only negative was that silver was only able to eke out a 1.40% rise versus gold’s 1.48% and for all eight cylinders to be hitting hard, silver’s percentage rise should have been in the 3% range. This is a minor negative but make no mistake; persistent underperformance by silver will derail the rally, especially if it is accompanied by the miners lagging which they most certainly did not with a 3.17% pop into the Friday close. 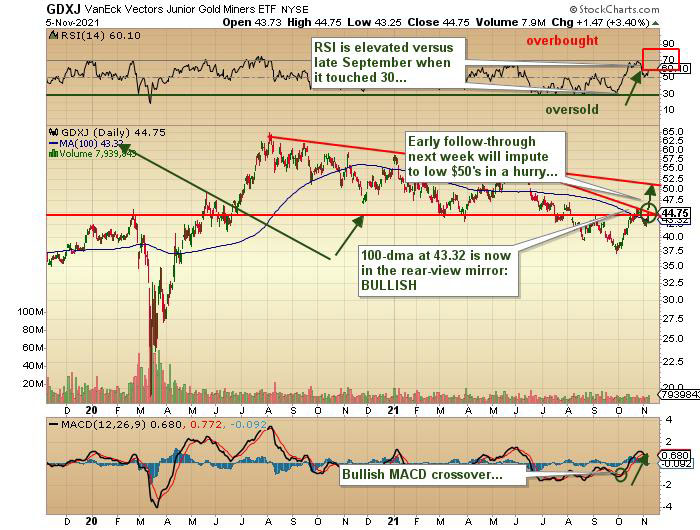 As subscribers now know from the materials they have received in recent days, relative to the S&P 500, either the gold miners are absurdly cheap or the S&P is absurdly dear with a possibility that reality may lie somewhere in the middle.

The chart shown below, courtesy of a superb study conducted by Trey Reik, spells it out in spades: the gold mining sector has been pummeled to valuation levels never before seen since Barron’s magazine first published the Barron’s Gold Stock Index back in the 1930s. In fact, if the companies in the GDM index were to change their names to exclude the word “gold,” they would probably avoid the word cloud search engines of the attack dog algobots that sell all things gold and silver irrespective of price or value. Barrick Gold should change its name to Barrick “Blockchain” Corp. in order to procure an immediate revaluation many times its current price.

This valuation compression in the GDM names has had a distinctly negative effect on the lower members of the gold and silver food chain because the bankers in New York and Toronto demand deal flow and since no senior executive in the GDM space wants to do a deal involving compressed valuation, there can be zero interest from the bankers or their hired gun analysts that cover the space. 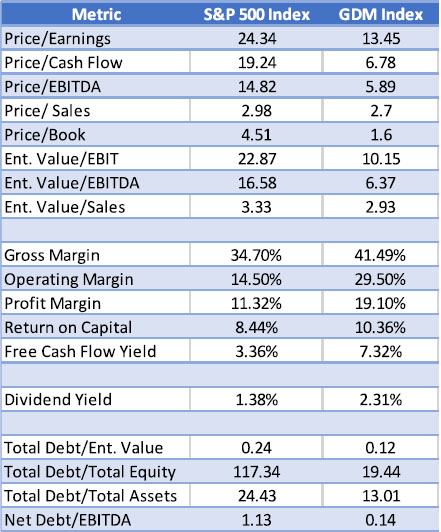 Therein lies the problem for many of the really promising developers (like Getchell Gold) where superb drilling results that are significantly expanding their resource are completely ignored by market participants that are enjoying mindboggling success trading the S&P names that just continue to hit new high after new high month after month with little heed to the Buffett Indicator or the deteriorating Advance/Decline line.

What junior gold investors need badly is a solid period of underperformance by the S&P or outperformance by the XAU/GDM in order to usurp flows away from the wildly popular names that sport zero earnings and toxic balance sheets yet still keep climbing.

There is an old expression that says that “money flows to areas where it is treated best” and — despite the rantings of Old School analysts trained in dissecting balance sheets and income statements — money has been treated wonderfully (thanks to the Fed) in the names that are simply “going up.”

I see a catalyst developing where gold miners will become a safe haven for those wishing to harvest profits from the “garbage” that has treated them so well and no better place to look than the high-yield or “junk” bond market where yields are beginning to diverge from treasuries. When the most speculative area of the bond market begins to see yields backing up, I must take heed; perhaps that is exactly what gold’s big move was signaling.

This coming week will be critical in establishing the potential for a big year-end rally because with tax-loss season looming large on the horizon, there are lots of S&P 500 profits on the books and thus far an equal number of GDM/XAU losses that can function as offsets. However, if it looks like there is a momentum shift in play, tax-loss selling may be minimal leaving the miners open for a thunderous move into January.

I think we are in the early stages of achieving “escape velocity” and that money will begin to quickly flow into the seniors and based upon the miniscule market cap of the gold and silver sectors, a pittance of switching will have a huge impact on price, just like we experienced in March 2020. Then, as the laws of physics kick in, the trickle-down effect will send capital flows into the junior developers where I believe exists the biggest leverage and greatest capital gain potential.

With the metals about to break free of the gravitational pull of the past fifteen months of lockdown, enjoy this move to escape velocity and invest accordingly.

Follow Michael Ballanger on Twitter @MiningJunkie. He is the Editor and Publisher of The GGM Advisory Service and can be contacted at [email protected] for subscription information.

Originally trained during the inflationary 1970s, Michael Ballanger is a graduate of Saint Louis University where he earned a Bachelor of Science in finance and a Bachelor of Art in marketing before completing post-graduate work at the Wharton School of Finance. With more than 30 years of experience as a junior mining and exploration specialist, as well as a solid background in corporate finance, Ballanger’s adherence to the concept of “Hard Assets” allows him to focus the practice on selecting opportunities in the global resource sector with emphasis on the precious metals exploration and development sector. Ballanger takes great pleasure in visiting mineral properties around the globe in the never-ending hunt for early-stage opportunities.

This article makes no guarantee or warranty on the accuracy or completeness of the data provided. Nothing contained herein is intended or shall be deemed to be investment advice, implied or otherwise. This letter represents my views and replicates trades that I am making but nothing more than that.

Always consult your registered advisor to assist you with your investments. I accept no liability for any loss arising from the use of the data contained on this letter. Options and junior mining stocks contain a high level of risk that may result in the loss of part or all invested capital and therefore are suitable for experienced and professional investors and traders only. One should be familiar with the risks involved in junior mining and options trading and we recommend consulting a financial adviser if you feel you do not understand the risks involved.