A Preliminary Economic Assessment has confirmed the viability of this company’s flagship copper asset in Chile.

The project has a post-tax net present value (NPV) of about $1.5 million at $3.60 per pound of copper with a post-tax internal rate of return (IRR) of 46.2%, according to the PEA released Tuesday.

“The PEA is the single most important development for the asset and the company,” the company has stated. “One that will define the full development potential for Escalones.”

Another asset for the company is the Zonia project in Arizona, a near-surface copper-oxide resource and brownfields site that was mined in the late 1960s and 1970s. Zonia has been de-risked with almost 700 drill holes completed and a lot of detailed engineering work done. 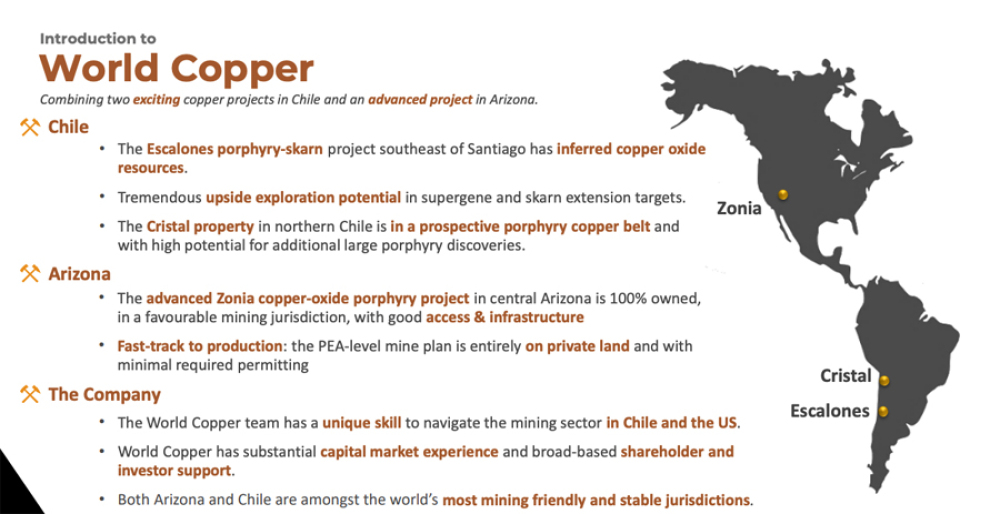 On Tuesday, the company published the results of the PEA for Escalones: 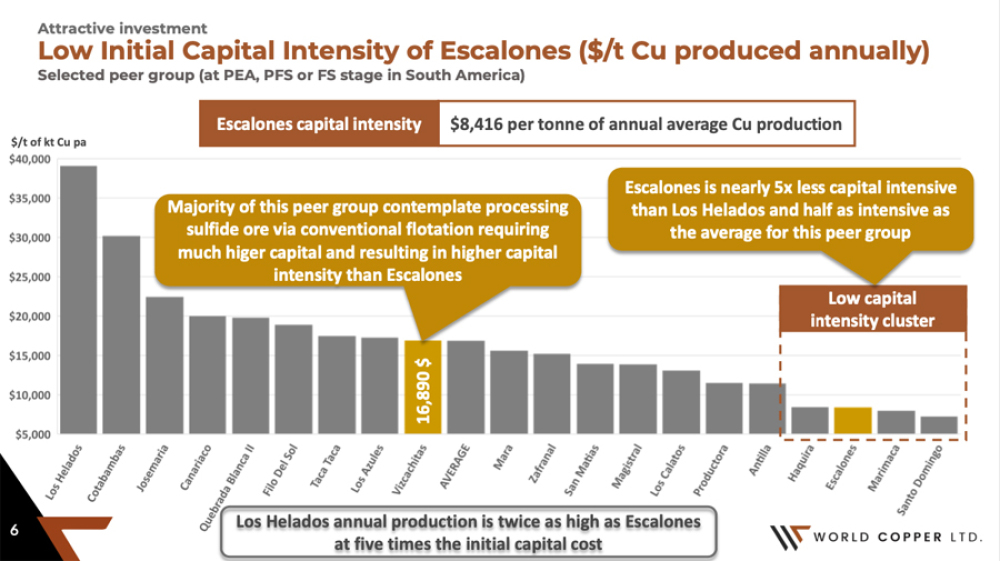 “On Jan. 28, 2022, we completed our merger with Cardero Resources and welcomed a new group of shareholders and a new project to our story,” Peterson said in a recent a one-year anniversary update.

“When we first listed in January 2021, World Copper traded under the radar with little fanfare,” added Peterson. “The significance of the updated resource statement for Escalones announced on Aug. 23, 2021, redefining it as a copper oxide resource, is now becoming understood in the market.”

The updated resource estimate confirms Escalones’ potential for development as a sizable copper oxide deposit and provides our company with new strategic options for advancement, Peterson said in an August 2021 news release.

“The previous group was targeting deep layers that contained small amounts of gold, basically ignoring the oxide layer,” Peterson recently told Streetwise Reports. “We noticed that a lot of the higher-grade copper blocks are in the oxide layer. So we ran tests, focusing on leaching the oxide layer.  We ended up with 426 million tons at .37% copper. This is Chile’s largest copper oxide deposit in exploration and development now.

“When you’re near the Earth’s surface, and you’re using a hydro metallurgical process, it is much cheaper to develop, you only have to crush the material, place it onto pads and spray it with sulfuric acid,” he said. “Then you use electricity to produce 100% pure clean copper, instead of a 30% copper concentrate, which is the product of the sulphide flotation operation. The CapEx is much lower.  Although Escalones is one of the largest proposed as oxide projects, we anticipate our CapEx will be under half a billion (dollars). The life of mine is shorter than a sulfide project, because you’re limited to that nearer-surface oxidized cap.  But we have a very a thick cap, and a large deposit.”

“We see a copper oxide project as lower environmental footprint, easier to permit, cheaper to develop, more attractive to majors or even midsized companies,” Peterson said. “In fact, we could potentially raise the money to advance this asset rather than waiting for a suitor.” 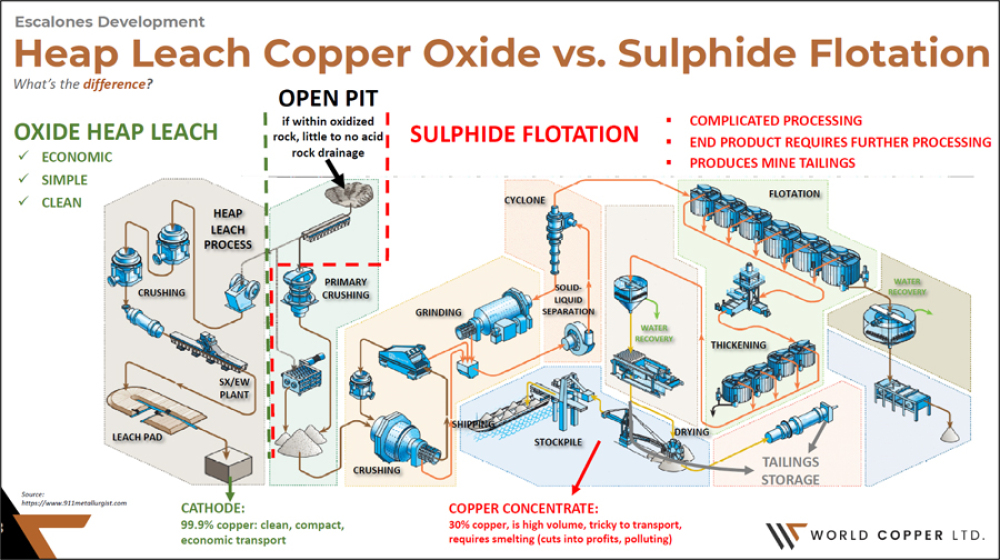 On Jan. 27, 2022, World Copper and Cardero Resource announced that they have agreed to combine their respective businesses.

Cardero Resource had exercised the exclusive option to acquire a 100% interest in the Zonia Copper Oxide Project. The estimated resource (NI 43-101 as amended and dated October 2017) is located entirely on private land.

“We saw an opportunity to pick up a significantly undervalued asset,” explained Peterson. “We did it with all shares, no cash. It’s a brownfield asset. Throughout its life, it’s produced 60 million pounds of copper.

“About 5% of the total resource was tapped in the 60s and 70s,” he said. “Copper prices tanked. It couldn’t produce profitably at that time. We have an opportunity to add 50% to the resource. The previous PEA indicated a resource of about 100 million tons. We think we can add 50 million tons by un-constraining the resource beyond the private patented land approach. With $5 or $6 per pound copper this would be an extremely valuable asset.” 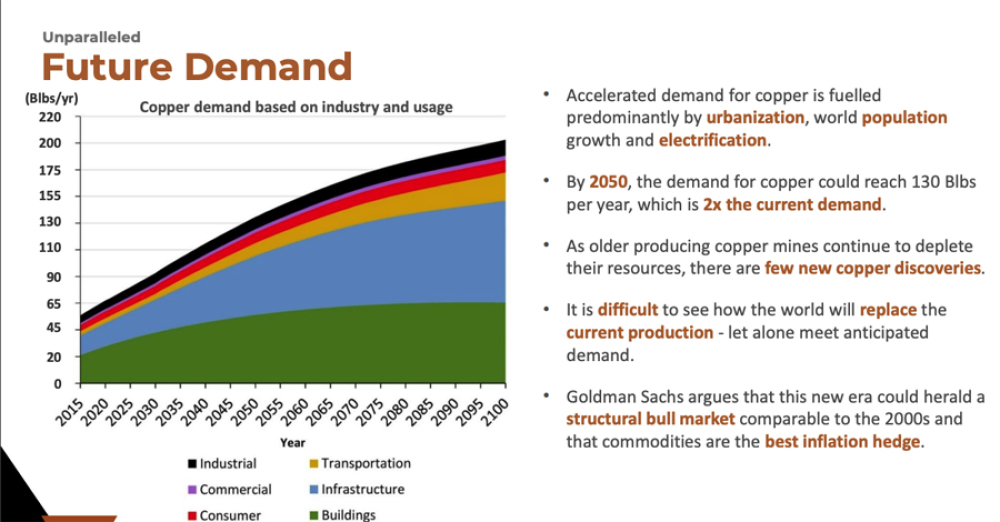 Chile is the world’s largest copper producing country. “About 35% of the global reserves and 30% of production come from Chile. A lot of the prosperity in the country comes from mining. It’s integral to their economy,” he said.

“Chilean President-elect Gabriel Boric will be sworn in on March 11, 2022, and oversee a vote on a new constitution in the South American nation,” reported Al Jazeera News.

Boric ran on a platform to modernize Chile’s public health sector, which serves 80% of the population, replacing the now-privately run pension system while raising benefits and increasing the minimum wage, the publication said.

Three weeks ago, Chile’s Senate forwarded an amended version of the country’s mining royalty bill with a modest raising of tariffs.

“For companies that produce higher levels, the royalty will be applied depending on the average annual copper price registered according to the prices of the London Metal Exchange,” the commission added.

Chile’s mining industry has strongly opposed plans to raise taxes, arguing that the level is already at its limit.

“The response from the business community to President Elect Boric has been fairly positive,” Peterson said after a recent visit to Chile. “Boric has appointed people in his Cabinet who are fairly moderate. The markets responded favorably. The U.S. dollar hit a three-month low against the Chilean pesos. We think the current political priorities create an opening for our project, because there is a push in Chile towards environmental sensitivity around mining development,” explained Peterson. “Chile wants to embrace projects that are cleaner and greener. We’re also getting pressure from our shareholders, potential investors, capital funds, to show them what our ESG policies are.”

World Copper has a strong in-country Chilean team. Marcello Awad has deep access to Chilean and South American deal-flow and M&A opportunities, Roberto Fréraut is a seasoned exploration manager for CODELCO Chile, and Patrick Burns is involved in the discovery of the Escondida copper mine, currently the largest copper mine in the world. 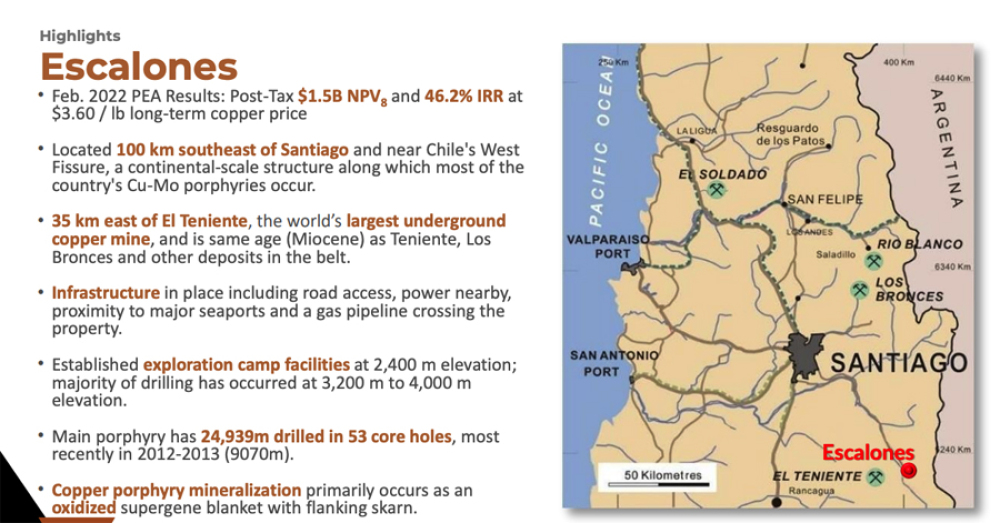 “We view this updated resource at Escalones as a new starting point for the project, and it gives us confidence that our strategy of targeting the oxide portions of Escalones was the correct first step in unlocking the potential of the deposit,” Peterson said. “As an oxide project, Escalones now has a streamlined path to production.

“The results of the PEA are a testament to our skill at understanding and identifying the key value drivers of copper deposits,” Peterson said in a news release. “As an oxide heap leach Escalones is positioned well to benefit from global decarbonization efforts and the evolving global economy, where reducing environmental impacts and contributions to preventing climate change are increasingly important. It is our goal to work hand in hand with our local partners and communities, to begin proving that more sustainable mining projects are not only possible but can also yield economic benefits to all stakeholders.”