BC Junior Looks to Boost Status in Golden Triangle

If your neighbors sell their house, the sale price will tell you a lot about the value of your home. In British Columbias Golden Triangle, companies with mines and well-defined resource development plans are getting taken out and the remaining players  and their investors  can see the favorable writing on the wall.

“Think of this as real estate: We’re in a neighborhood where we’re surrounded by $5 to $10 million homes, and our home is trading at $500,000 or $600,000 valuation – and there’s a reason for that. The reason is we haven’t done as much work as a company like Skeena Resources Ltd. (SKE:TSX; SKE:NYSE),” Khunkhun tells Streetwise.

“But then you look at some of the other neighbors where we have done as much work or if not more, and we’re trading at a lower valuation, I think there’s a tremendous opportunity.”

The “neighborhood” is northern British Columbia’s Golden Triangle, witness to more than 100 years of mining and home to the highest-grade mine ever discovered in North America: Barrick Gold Corp. (ABX:TSX; GOLD:NYSE)‘s past-producing Eskay Creek. 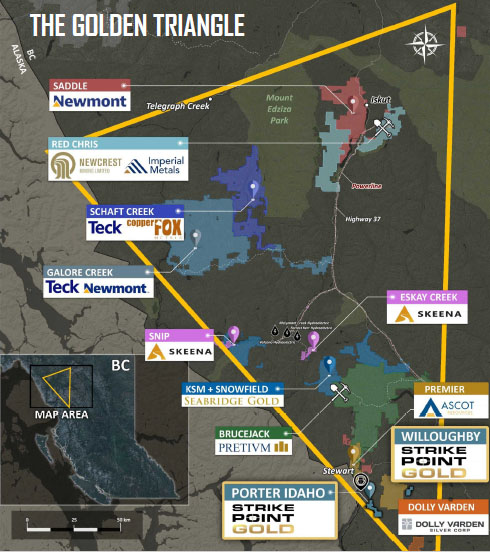 The triangle has also witnessed roughly $4.8 billion in mergers and acquisition activity over the last three years or so.

That deal came about two years after Newcrest unloaded US$804 million to buy Imperial Metals’ Red Chris polymetallic mine at the Golden Triangle’s northern tip.

Ascot plans to bring the past-producing Premier gold mine, acquired in a separate deal in 2018, back into production late in 2022 before bringing Red Mountain into production at some point down the road. Ascot also owns about 5% of Strikepoint.

Strikepoint acquired Willoughby, located about 6 km east of Red Mountain, in 2019 for $85,000 cash and issuing Arcwest Exploration 3 million shares. Willoughby had about 119 holes drilled on it in the 1990s by now-defunct companies like Camnor Resources and Gold Giant Minerals.

Khunkhun believes Red Mountain is in a gold system that’s part of a much larger gold system.

“There was a significant amount of work done on (Willoughby). And we inherited a tremendous drill database that highlighted some very high-grade gold and silver intercepts,” Khunkhun tells Streetwise. “Without a doubt I knew this was one of the premier properties in the Golden Triangle. The question that I’m trying to answer is, ‘Can we prove continuity between these high-grade zones?’ If we can prove continuity, we’ve got a mine on our hands.”

Not far south of Brucejack, which initially had difficulties with continuity of its mineralized systems, Strikepoint is not just whistling Dixie. Channel samples taken from well-exposed bedrock along steep terrain at the Icefall zone at Willoughby show promise.

Strikepoint also drilled 23 holes on Willoughby in 2021 but has only reported four holes – with gold-silver mineralization encountered in all of them.

“Once we get all of those definitive assays, and we model those 2021 results with the drilling the Strikepoint did in 2020 and 2019. And then we will factor in the historical drilling that was predominantly done in the ‘90s, and we’ll come up with a model. And we’ll go out and drill some serious meters in 2022,” Khunkhun says, adding that an initial resource estimate will likely follow this year’s drill program.

Some of the biggest players in the junior mining sector are Strikepoint shareholders. Eric Sprott owns about 16.5%, while Skeena Resources owns 6%. Other institutions with significant positions include Denver-based Crescat Capital, Vancouver-based Delbrook Capital Advisors, and Calgary-based Middlefield Capital.

2) The following companies mentioned in this article are billboard sponsors of Streetwise Reports: Strikepoint Gold Inc. and Pretium Resources. Click here for important disclosures about sponsor fees. The information provided above is for informational purposes only and is not a recommendation to buy or sell any security.

4) From time to time, Streetwise Reports LLC and its directors, officers, employees or members of their families, as well as persons interviewed for articles and interviews on the site, may have a long or short position in securities mentioned. Directors, officers, employees or members of their immediate families are prohibited from making purchases and/or sales of those securities in the open market or otherwise from the time of the decision to publish an article until three business days after the publication of the article. The foregoing prohibition does not apply to articles that in substance only restate previously published company releases. As of the date of this article, officers and/or employees of Streetwise Reports LLC (including members of their household) own securities of Strikepoint Gold Inc. and Pretium Resources, companies mentioned in this article.

BC Junior Looks to Boost Status in Golden Triangle News

BC Junior Looks to Boost Status in Golden Triangle Resources